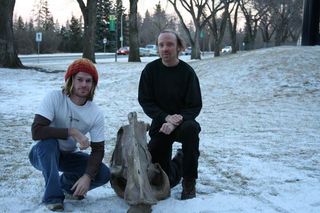 Polar dinosaurs such as the 3.3-ton duckbill Edmontosaurus are thought by some paleontologists to have been champion migrators to avoid the cold, dark season. But a study now claims that most of these beasts preferred to stick closer to home despite potentially deadly winter weather.

While some polar dinosaurs may have migrated, their treks were much shorter than previously thought, University of Alberta researchers Phil Bell and Eric Snively conclude from a recent review of past research on the animals and their habitat. Polar dinosaurs include hadrosaurs, ceratopsians, tyrannosaurs, troodontids, hypsilophodontids, ankylosaurs, prosauropods, sauropods, ornithomimids and oviraptorosaurs.

This idea goes against a once-popular "Happy Wanderers" theory published in 1980 by paleontologist Nicholas Hotton III, who thought that long-distance migration allowed polar dinosaurs to escape the coldest winter temperatures.

Hotton and others suggested that some dinosaurs living near the North Pole followed the centrally shifting sunlight, or latitudinal "sun line" where the sun ceases to rise for part of the year, as part of their migration.

That would mean the animals might travel as far as 30 degrees of latitude, or 1,980 miles (3,200 kilometers) one way, in order to survive and avoid the total darkness of a polar winter.

"There are strong opinions regarding dinosaur migration, but we decided to take a different approach, looking at variables such as energy requirements," Bell said.

A comparison of great migrators

Bell and Snively's study led them to conclude that some migrating polar dinosaurs could have traveled up to 1,800 miles (3,000 kilometers) round-trip — only half of the distance suggested previously by Hotton.

For comparison, here are some of the roundtrip distances covered by some of today's migrating land animals, according to the Alberta team:

Dinosaurs fine up there

Discoveries of large bone beds all over Western North America have suggested to paleontologists that many dinosaurs in this region traveled long distances.

In order to sustain the herd, "it seemed to make sense that they would be moving to and from the poles," Bell said.  While this view of migration is feasible for some species of polar dinosaurs, it does not hold for all, he said.

"Many types of dinosaurs were surviving in polar latitudes at the time, and getting along quite fine," Bell said. "They were not physically able to remove themselves from the environment for a variety of reasons and had to adapt to the cold, dark winters just as the rest of us mammals do today."

In fact, some evidence suggests polar dinosaurs tolerated the cold remarkably well and adapted to lasting through the tough winters, Bell and Snively write. Sauropods, theropods and ankylosaurs all endured three months of winter darkness, possibly foraging on tough stuff like conifers, ginkgoes, horsetails and ferns, rather than hibernating or burrowing, some research suggests.

The mean annual temperatures at the poles were warmer than they are today, around 41 degrees Fahrenheit (5 degrees Celsius), according to research noted by Bell and Snively. This meant more foliage was available for munching, and also blocked movement and left less wide open space for migration.

Also, it is now known that some small theropod dinosaurs, including some tyrannosaurs, had feathers that could have kept them warmer in colder climates. Among polar dinosaurs, that could apply to troodontids, ornithomimids and oviraptorosaurs, which are all theropods.

Edmontosaurus has been considered the "poster boy" of migrating dinosaurs, Bell and Snively wrote in their study. Fossil evidence for the dinosaur spans some 807 miles (1,300 km) between Alaska and central Alberta, south to Colorado, although this doesn’t necessarily mean the animals covered this distance. This distribution could just represent the animals' dispersal over time, the authors write, just as saltwater crocodiles are found in waters ranging from Australia to India but they do not migrate across those distances.

But given their size and physiology, dinosaurs would have been incapable of sustaining the effort needed to make the trip, Bell and Snively concluded.

"When we looked at the energy requirements needed to support a three-tonne [2,200-pound] Edmontosaurus over this distance, we found it would have to be as energy efficient as a bird. No land animal travels that far today," Bell said.

However, it is possible that Edmontosaurus regalis, one of the three known species of this dinosaur, had the metabolism and fat deposition rates required to make a 1,600-mile (2,600-km) round-trip journey, traveling at speeds between 1.2 and 6.2 mph (2 and 10 kph) — a slow walking pace for a human, the Alberta team claims.

Bell and Snively's findings were published in the September issue of Alcheringa: An Australasian Journal of Paleontology. The work was supported by the University of Alberta and an Alberta Ingenuity Fellowship received by Snively.