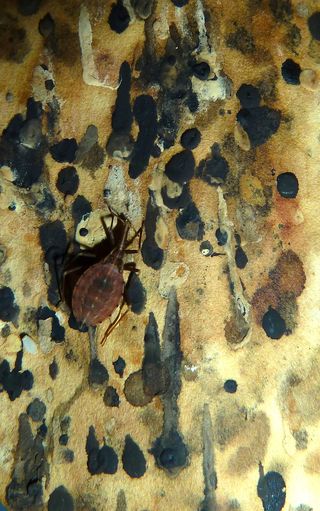 Insects create the art in this 2013 Research as Art runner-up. And the medium is … their own excrement. The insect Rhodnius prolixus is a bloodsucker whose poop contains the parasite that causes deadly Chagas disease. However, postdoctoral researcher Miranda Whitten and colleagues have learned how to silence the insect's genes using engineered bacteria from its own gut, a technique that allows them to study the insects' gene function and possibly to control the spread of Chagas.
(Image: © © Swansea University, Miranda Whitten )

Typically, you have to crack open the candy shell of a Kinder Surprise egg to find out what kind of toy surprise is tucked inside — that is, unless you have an X-ray micro-computed tomography scanner and a 3D printer.

Using these tools, University of Swansea engineering doctoral student Laura North and her colleagues created a replica of the surprise toy inside the popular European candy without ever cracking the egg. A comic strip of the process won North first place in the 2013 Research as Art competition hosted by the university.

"I was absolutely over the moon," North told LiveScience. Fellow winners included an image of a gorgeous glacier in motion and an abstract painting made with insect poop. [See Images of the Artistic Science Winners]

The Research as Art competition is open to University of Swansea faculty, staff and students and is judged by a panel drawn from organizations such as the Royal Academy of Arts, Research Councils U.K., and popular science magazine New Scientist.

North's winning entry describes the process of 3D printing a toy found inside a Kinder Surprise egg, a candy banned inside the United States because confections with "non-nutritive objects" embedded in them are forbidden by Food and Drug Administration regulations.

To reveal the toy inside the Kinder Surprise, North and her colleagues first scanned the egg with a micro-CT (computed tomography) scanner, the same type of technology used in hospitals to create cross-section images of the inside of the body. Next, they used the CT images to program a 3D printer to fabricate a replica of the toy out of plastic.

The candy egg, of course, is only a way to demonstrate the technology, North said. The same technique could be used to scan people's joints and then custom-make a joint replacement that fits their body perfectly. She and her colleagues have also worked with the university's Egyptology center to scan the mummified remains of a snake and print out a replica of its skull.

"It's a great way to look inside something non-destructively," North said.

Other Research as Art winners portrayed their science in similarly creative — and often jaw-dropping — ways. Geographer Adrian Luckman won the Academic Award for his colorful visualization of ice flow in an Arctic glacier, with cool blues representing slow ice and hot pink revealing where the ice flows as much as 8.2 feet (2.5 meters) per day.

Runner-up Miranda Whitten's photograph of a blood-sucking insect (Rhodnius prolixus) amid a splattering of excrement is reminiscent of Jackson Pollock, but the consequences of R. prolixus poo are anything but: The excrement contains the parasite that causes deadly Chagas disease, which infects approximately 11 million people worldwide.

Other notables from the contest include a super-close look at a new material that generates its own electricity when exposed to a temperature gradient; a cartoonish look at early medieval facial wounds; and a tranquil seaside scene highlighting the power of the tides.