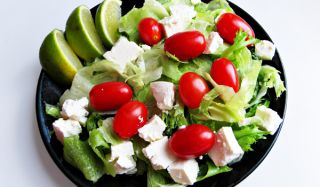 By looking at a healthy salad before a greasy cheeseburger, you're more likely to overestimate the number of calories in that burger, a new study suggests.

That's because the order in which you encounter food items makes a difference when it comes to correctly counting calories, according to Northwestern University researchers.

In the study, a group of people were shown a cheeseburger and asked to estimate its calorie content. They said the cheeseburger had 570 calories.

Then, another group was asked to estimate the calorie count of a salad, and then a cheeseburger. In this case, they thought the burger had 787 calories a 38 percent increase over the estimates of the people who only saw the cheeseburger, the study said.

"Simply switching the order in which our respondents evaluated the two meals resulted in significant changes in their perceived calorie content," according to the researchers.

In reality, a cheeseburger from McDonald's or Burger King with American cheese, a beef patty, a bun, pickles, ketchup, mustard and onion has about 300 calories.

When the foods presented were even more dissimilar like a fresh salad and an indulgent slice of cheesecake researchers found that people's estimates of calorie counts are even further off.

The findings provide insight into how people think about and predict calorie totals, the researchers said. They hope the findings can help with diet strategies, since overestimating calories when encountering a healthy food item may prompt people to be conscious of how many calories they're consuming.

The study was published Sept. 20 in the Journal of Consumer Research.