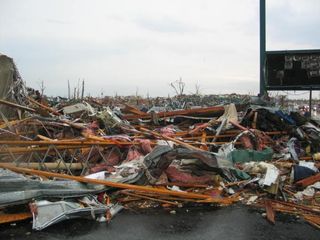 Monday's monster tornado in Moore, Okla., was a terrible reminder of nature's tremendous wrath for people in Joplin, Mo., a town also hit by one of the country's worst twisters.

Today (May 22) marks the anniversary of the EF5 tornado that ripped through Joplin two years ago, killing 158 people and destroying some 7,500 homes and 550 businesses, including an entire hospital. As they remember their own day of ruin, Joplin residents are already mounting a relief effort for Moore. The cities are about the same size, and both have been pummeled by several tornadoes in the past 15 years. With the Joplin tornado anniversary fresh in their minds, people in Joplin say the road to recovery for Moore will be long, and residents would be wise to go slowly.

"The thing about disaster relief is it's a marathon, not a sprint. You have to manage the pace, otherwise you burn out quickly," said Josh Marsh, a pastor at IgniteChurch.tv in Joplin.

The next few years won't be the first time Moore rebuilds after an EF5, the most violent and destructive of all tornadoes. A disastrous 1999 twister caused $1.3 billion in damage and killed 36 people. Moore rebuilt in time for another tornado in 2003, then, in a rare double strike, another deadly EF5 hit the town on Monday (May 20).

"They may have a step up on us, because this is their second terrible tornado, whereas this was our first," said Jane Cage, chair of the Joplin Citizens Advisory Recovery Team. "They may already be more organized than we were."

Watching the Moore tornado disaster unfold on TV gave Cage a new perspective on the Joplin tornado. "There was no TV for a week and the paper didn't show up for a couple days, so I was really unaware of a lot of what was going on. In some ways, it feels as though I'm seeing Joplin for the first time. I understand now why my friends were so worried. It's frightening. It's kind of a new perspective for me," Cage told LiveScience. [Image Gallery: Moore Tornado]

Joplin is still recovering, with a new hospital nearly finished and a high school under construction. But 85 percent of the 531 businesses destroyed in the 2011 tornado have reopened, and 100 new businesses have come to town in the past two years, said Kirstie Smith, communications director for the Joplin Chamber of Commerce.

"It's vital that businesses stay open or get reopened quickly. We found that the national media was making statements like Joplin has been wiped off the map, and we didn't want anybody to think that we weren't open for business in Joplin," Smith said.

But Smith also cautioned business owners to think long-term, and work with the Small Business Administration officials that will set up shop with the Federal Emergency Management Agency (FEMA) in Moore and other areas affected by the Moore tornado.

"People will find that after a year or even longer, businesses will be struggling a little bit. We established a business recovery fund in Joplin and have helped about 30 businesses now, but we only started dispersing that money after a year." Smith said. Yesterday, the Joplin Chamber of Commerce started a similar fund for Moore, which is accepting donations from Joplin residents and donors nationwide.

Along with cash donations, many people have already appeared in Moore to volunteer with relief efforts. But those affected by the Joplin tornado say that's not the best way to help, at least at first.

"On day three, I don't think we had even processed exactly what had happened," said Kate Massey, the former director of Rebuild Joplin and director of community impact at the United Way. "We were still in the middle of search and rescue — there was a lot of chaos going on. People were trying to salvage what is left of personal belongings. It was really about just making it minute to minute," she said.

Massey and others interviewed for this article recommended that volunteers wait for the call for help from organizations working with people in Moore, whether it's for cleaning up debris or donating first-aid and hygiene kits.

"The greatest response is listening and seeing what's needed," Marsh said. "The little things can make a huge difference."

Three people from Marsh's Ignite Church went to Moore yesterday to deliver forms that will help a local church organize volunteers and donations. The organizational system was developed as the Joplin church struggled with its own tornado relief efforts in 2011. [Moore, Okla. Tornado – FAQ]

"Right after the tornado hit, our church became so many things; a triage center, a shelter, a donation center, people were fed and clothed, and in that process, we learned that disaster relief is not just for the short term," Marsh, the pastor, said.

They also learned to remind those affected by the tornado — and volunteers, too — to take breaks from the devastating scenes, or just remember to put on sunblock. "Everybody has an amazing heart and they want help, but you've got to stop them from burning out," Marsh said.

For Marsh, his emotions didn't process until a week after the tornado, when he was reading a list of names of the dead. "That's when it all came crashing down," he said. Finding a loved one, a neighbor or someone to share the burden is important in days and months after the disaster, Marsh said. "As a pastor, the first thing I want people to know is they're loved and they're not alone," Marsh said. "It's a danger when you're isolated."

Massey said it took her eight months to start processing her tornado story, through listening to the survivor stories of others. Massey rode out the twister in a store with her family, including her four-week-old baby, but didn't lose any relatives or belongings.

For Massey, finding a little piece of normal helped alleviate the stress. "For me, it was reading the paper on the deck on Sunday morning and having my coffee," Massey said. But even without a house, a coffee and the Sunday paper can still recreate that routine.

"For those of us not affected personally, there's a level of survivor's guilt," Massey said. "There is a lot of post-traumatic stress and mental health issues that are still going on in our community. We still see the need for counseling for kids when there is stormy weather approaching or the sirens are tested. I think that will last for a long time," she said.

Tim Bartow, a Joplin tornado survivor now living in Arkansas, said hearing tornado sirens on Monday, and watching the destruction on television, brought back the anxiety and fear he felt two years ago.

"You're almost transported back to experiencing the same event all over again," he said.

Bartow's damaged house,  became a focal point for volunteers after he spray-painted inspirational messages on its remaining walls, prompting others to do the same. "For me, what personally kept me going was I knew that in spite of all the tragedy, there's going to be a lot of miracles," he said.

Today, as residents of Joplin gather to observe a moment of silence for their lost loved ones, they will also create a giant memorial for the city of Moore. The cards and remembrances will be delivered when people in Moore "are ready to receive it," Massey said.

"At the moment our hearts are kind of broken alongside theirs, but we know that the days will come when things will be better. We are there in spirit for them for whatever they need," she said.