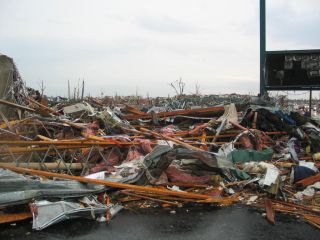 The devastation in Joplin.
(Image: © NOAA.)

Tornado sirens blare quite often in Joplin, Mo., and many people didn't take immediate action this year when the siren sounded before a massive tornado devastated the town.

"Most people ask 'How serious is a siren warning?'" said Richard Wagenmaker, meteorologist-in-charge of the Detroit Weather Forecast Office, who led an assessment of the response to the tornado that includes recommendations on how to improve warning systems to better help people judge the level of danger they might be in.

The Joplin tornado struck on Sunday, May 22, as an EF-5, the strongest rating on the tornado damage scale. The twister killed 159 people, according to the U.S. National Oceanic and Atmospheric Administration (NOAA), making it the seventh deadliest in U.S. history and the deadliest in at least 60 years. It also injured more than 1,000.

To help avoid similar disasters in the future, NOAA's service assessment released today (Sept. 20) has made suggestions to be evaluated and will help guide towns around the country on the best practices for tornado warnings.

Stories of loss and survival

Wagenmaker and his team interviewed 100 people in the field a week after the tornado hit and asked them about what prompted them to take shelter. Many said the first siren didn't trigger any concern, as they often go off as false alarms or for other reasons. Most of those interviewed said they waited for further confirmation from television broadcasts or from looking outside and seeing the twister before they sought shelter.

The tornado was wrapped in rain, so it was hard to see until it was dangerously close.

Social media and text messaging alerted some people to the immediate danger, though was not as big a factor in warning people as the team originally expected. One woman interviewed said she was eating dinner with her family at a restaurant when she got a text message and phone call during dinner about the tornado. The alerts prompted to her to take shelter in the restaurant before the tornado hit.

Weather radios were not common in the area, the report found.

Many residents did eventually take shelter, but for several reasons such as the lack of basements, many did not survive. One woman interviewed lost 16 neighbors on her block.

She heard the first siren and turned on the TV and only took cover with her daughters when the broadcast said to. When a second siren sounded, she told the interview team that she thought it could be an all-clear signal and nearly came out of her shelter in the bathroom just before the tornado destroyed her house.

The team recommended looking into the possibility of using different tones on sirens to indicate different levels of threat, as well as adapting automated warnings to distinguish between smaller, less threatening tornados and killers like the one that hit Joplin.

Insurance payouts from the Joplin tornado now exceed $1 billion, and that amount eventually could double, according to the Missouri Department of Insurance. The Joplin tornado stands to pass the 1966 Topeka, Kan., tornado as the costliest in U.S. history.

The supercell thunderstorm that produced the devastating twister formed over Kansas. Warnings had been issued 48 hours prior that this thunderstorm could get nasty.

The National Weather Service (NWS) received its first report of the tornado at 5:34 p.m. local time, from west of the Missouri-Kansas border.

Seven minutes later, there were reports of a tornado within Joplin's city limits, about 7 miles (11 km) east of the first sighting. The first tornado warning that included the city of Joplin had been issued at 5:17 p.m. local time. The tornado struck the town at about 5:41 CDT (6:41 EDT). [Related: Why Tornado Forecasting is Tough]

To help prevent another big tornado from killing so many, the NOAA report recommended several best practices, such as more frequent radar scans and a better way to use tornado sirens to alert people of immediate danger. Even color-coded warnings could help save lives.

"Something that simple could be a very valuable tool," said Lynn Maximuk, the director of the NWS central division.

Keith Stammer, the emergency manager Jasper County, Mo., where Joplin is located, said that the town has applied for FEMA funding for 10,000 weather radios for households in the area and also for shelters for residents.

The 2011 tornado season was a particularly damaging one, and the lessons learned in Joplin could help save lives across the country. Tornadoes have killed 546 people this year, the fifth deadliest season on record, according to the nation's Storm Prediction Center.

An outbreak of tornadoes from April 25 to 30 over central and southern states led to 327 deaths. Of those fatalities, 240 occurred in Alabama. The deadliest of the estimated 305 tornadoes in the outbreak was an EF-5 that hit northern Alabama, killing 78 people. Several major metropolitan areas were directly affected by strong tornadoes, including Tuscaloosa, Birmingham and Huntsville, Ala., and Chattanooga, Tenn.