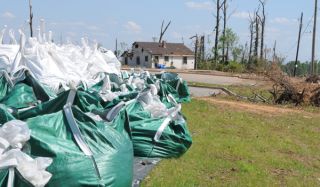 Bags containing soil contaminated with oil from damaged electrical transformers. They were disposed of as hazardous waste following a tornado in Pleasant Grove, AL. in April 2011.
(Image: © Tim Burkitt | FEMA)

The lasting image of any tornado strike is that of houses reduced to heaps of wood and shingles. But where does that debris go?

Debris scattered by a tornado is handled, to varying extents, by the local and the federal governments. Although exact procedures depend on the level of damage caused by a tornado, the standard clean-up includes collecting, separating and disposing of debris in landfills.

After a tornado , the level of clean-up needed is evaluated by local officials. If they deem that the recovery is too extensive for them to handle, they ask state officials for assistance. Likewise, if state officials then determine that it's too big of a job for them to carry out alone, they can ask the federal government for help. Once the president gives authorization, the Federal Emergency Management Agency (FEMA) steps in to help with the clean-up process.

It's standard for government officials to hire contractors to carry out the waste disposal process, and these contractors follow strict state and federal regulations regarding how debris should be handled, transported and thrown out or destroyed. [Read: Why Aren't There Tornado Safety Building Codes? ]

Debris is separated into different types of materials, including natural waste and hazardous waste, and is then collected in trucks specifically designed for collecting waste left over from natural disasters, according to Billy Birdwell, the chief of public affairs for the U.S. Army Corps of Engineers' (USACE) recovery field office in Birmingham, AL. USACE is currently helping to dispose of debris resulting from the tornadoes that hit Alabama this spring.

The trucks then transport the debris to landfills and waste management or recycling centers so that each type of material can be disposed of properly and in an environmentally-conscious way . "What we call 'white waste,' which includes appliances such as refrigerators and air conditioners, are routinely recycled, so we separate them from other waste and bring them to recycling centers," Birdwell told Life's Little Mysteries.

Which landfills the debris actually ends up in depends on whether the state's landfills have the capacity to accommodate all of the disaster's waste . In the case of the Alabama tornadoes, the debris was placed in specially-designated landfills that were already being used by the state. For the waste resulting from the tornado that hit Joplin, Mo. , on May 22, city and state officials are planning to transport the debris to one landfill in Missouri and two landfills in Kansas.

"Debris will be deposited at landfills that will accept the waste," said Tammy Spicer, a representative for the Missouri National Guard, which has been assigned by Missouri state and city officials to oversee the contractor removal of debris from the Joplin tornado. "Different landfills have different requirements for what they'll take."

Some natural materials, such as uprooted trees, may be safely burned at special sites or ground up into mulch, Birdwell said. This mulch can then be recycled into an alternative fuel or used as a covering layer for a landfill, which is placed atop of landfill waste to limit its interaction with the surrounding air.