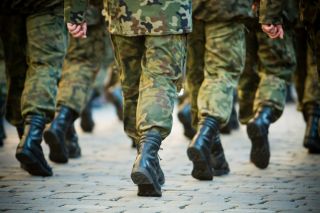 Marching soldiers are cautioned to break stride on a bridge, lest they match the bridge's frequency of vibration.
(Image: © Rafal Olkis | Shutterstock.com)

In April 1831, a brigade of soldiers marched in step across England's Broughton Suspension Bridge. According to accounts of the time, the bridge broke apart beneath the soldiers, throwing dozens of men into the water.

After this happened, the British Army reportedly sent new orders: Soldiers crossing a long bridge must "break stride," or not march in unison, to stop such a situation from occurring again.

Structures like bridges and buildings, although they appear to be solid and immovable, have a natural frequency of vibration within them. A force that's applied to an object at the same frequency as the object's natural frequency will amplify the vibration of the object in an occurrence called mechanical resonance.

Sometimes your car shakes hard when you hit a certain speed, and a girl on a swing can go higher with little effort just by swinging her legs. The same principle of mechanical resonance that makes these incidents happen also works when people walk in lockstep across a bridge.

If soldiers march in unison across the structure, they apply a force at the frequency of their step.

If their frequency is closely matched to the bridge's frequency, the soldiers' rhythmic marching will amplify the vibrational frequency of the bridge. If the mechanical resonance is strong enough, the bridge can vibrate until it collapses from the movement.

A potent reminder of this was seen in June 2000, when London's Millennium Bridge opened to great fanfare. As crowds packed the bridge, their footfalls made the bridge vibrate slightly. "Many pedestrians fell spontaneously into step with the bridge's vibrations, inadvertently amplifying them," according to a 2005 report in Nature.

Though engineers insist the Millennium Bridge was never in danger of collapse, the bridge was closed for about a year while construction crews installed energy-dissipating dampers to minimize the vibration caused by pedestrians.