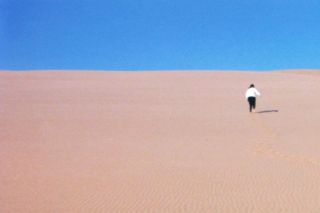 In the absence of visual cues, people tend to walk in circles.
(Image: © sxc.hu)

When lost in the desert or a thick forest terrains devoid of landmarks people tend to walk in circles. Blindfolded people show the same tendency; lacking external reference points, they curve around in loops as tight as 66 feet (20 meters) in diameter, all the while believing they are walking in straight lines.

Why can't we walk straight?

Only recently have scientists begun to make gains in answering this age-old question. By conducting a series of experiments with blindfolded test subjects, a group of researchers at the Max Planck Institute for Biological Cybergenetics in Germany have systematically ruled out several plausible explanations for loopy walking. For example, body asymmetries has been posed as one theory, but the team found no correlation between factors such as uneven leg lengths and right- or left-side dominance and walkers' veering directions.

The researchers also ruled out random physical errors, such as incorrect gauging of how you need to move your legs to walk straight, arguing that these would cause walkers to meander back and forth in a zigzag fashion rather than to trace out circles.

The researchers believe that loopy paths follow from a walker's changing sense of "straight ahead." With every step, a small deviation is likely added to a person's cognitive sense of what's straight, and these deviations accumulate to send that individual veering around in ever tighter circles as time goes on.

This increasing curvature doesn't happen when external reference points are visible, because these allow the walker to frequently recalibrate his or her sense of direction. When walking down the street, for example, the looming presence of a nearby building (as seen in your peripheral vision) prevents you from curving into it. [How Does a Compass Work? ]

As of yet, no one is sure where in our inner workings the accumulating deviations arise. However, as detailed in the July 2011 issue of the journal Experimental Brain Research, the Max Planck team thinks the brain's vestibular (balance-maintaining) and propioceptive (body awareness) systems combine to enable regular spatial updating and it may be the vestibular system in the inner ear that malfunctions in the absence of visual clues. "We will continue to work on these issues in the near future," Marc Ernst, group leader, told Life's Little Mysteries.

That inner-ear system is already known to exhibit biases: Some people have vestibular disorders so severe that they find walking in straight lines impossible even under normal circumstances. For most of us, the subtle leftward or rightward bias of our sense of direction would only rear its head if we were trying to find our way through a dense forest, or, perhaps, blindfolded by pirates and made to walk the plank.