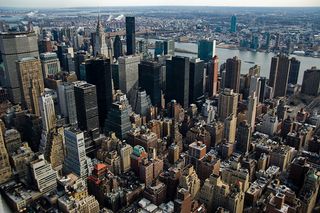 Cranes are dangerous in the hand of inexperienced operators as well as due to other factors.
(Image: © Patrick Theiner | Creative Commons)

A spate of construction crane incidents has brought an ongoing builders' issue to public awareness, according to Phillip Ezzell, a former crane operator and now CEO of Crane Safety Associates of America.

The issue: Towering cranes used on construction sites to lift and transport hefty loads can be extremely dangerous and often lethal when they fall over, or when parts or the entire crane collapses due to some structural failure. But these structures are no more dangerous now than they were, say, five years ago, according to Ezzell.

On July 30, 2008 the nation's news involved a crane that was lifting beams from an old bridge over a Texas river. The crane reportedly became overloaded and toppled Wednesday, killing one worker and injuring another. On July 18 of the same year, a crane collapsed at a Houston oil refinery, killing four and injuring seven others.

"There are always crane accidents occurring. The issue is you don't hear about them," Ezzell said. "They're usually local news unless you lose an entire crane in Manhattan. They are highly visible; then it becomes something everybody is aware of." Due to the public awareness nowadays, when a local crane accident occurs, the national media picks it up.

He added, "After a while it will quiet down and it'll go back to being local news again."

Ezzell was referring to a crane that collapsed in Manhattan in March of 2008, killing seven people and injuring more than 10 others. Then, in May, a Manhattan crane incident killed two construction workers.

Sad as the events might have been, they're par for the course. An average of 22 construction workers died in crane-related incidents each year from 1992 to 2006, according to a recent report by the Center for Construction Research and Training.

However, even this straight line trend has people like Ezzell concerned. Construction cranes "are extremely dangerous in the wrong hands," Ezzell told LiveScience. "It's been proven to be the one piece of equipment that has the potential to do the most damage on any job."

Years ago, before alloy steel came about, cranes were overbuilt with heavy steel, so it was pretty difficult to tip them over, he said. "Now we have got the new alloy steels, so they are building cranes and they are rating the cranes very close to their structural limitations," Ezzell said.

Some of the older crane operators, he added, "operated by what we call seat of the pants. They would just pick up the load and see if the crane was going to tip over or not."

Operators must have lots of experience and "finesse," Ezzell says, so they know how heavy of a load the crane can hold and also how to maneuver the crane with that particular load.

Currently, some states have mandatory certification of crane operators while many others don't, he said.

In 2008, the Occupational Safety and Health Administration (OSHA) came out with new standards for crane safety. Ezzell hopes the standards will include a program called the National Commission for the Certification of Crane Operators (NCCCO) that would mandate training and certification.

Other important crane safety issues include maintaining the crane itself and proper inspections, Ezzell said.