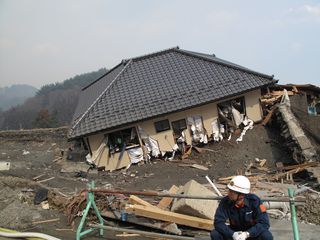 If your heart beats rapidly during an earthquake, it still doesn’t compete with high-frequency waves generated by the quake. These waves shake the ground faster than your ticker’s thrumming and cause the most damage to smaller structures, such as house­­s.

Researchers now have a new explanation for the source of these poorly understood high-frequency seismic waves. The longer a fault heals between earthquakes, the faster the waves once the fault finally breaks again, according to a new study detailed in the Oct. 31 issue of the journal Nature.

"We can think of a fault as just as crack or a cut in the ground. When they heal, it may not be all that different than how a cut in your skin heals. There are physical and chemical changes that occur right on the surface," said Gregory McLaskey, lead study author and a postdoctoral researcher at the U.S. Geological Survey in Menlo Park, Calif.

The model indicates faults get stronger when they heal, and the healing process changes the next earthquake, McLaskey said.

Though the next quake may not be bigger in terms of magnitude, it could be much more intense, with more rapid shaking, he said.

"It doesn't just affect the strength of it, it affects the way the ground will shake when it ruptures. The more the fault has healed, the more rapid vibrations and jolts will be produced when the earthquake does come," McLaskey told OurAmazingPlanet.

Understanding how the ground will move

Earthquake engineers would like to better understand and predict these waves, said Steven Glaser, study co-author and a professor of engineering at the University of California, Berkeley. The high frequency makes them difficult to measure as they happen, and to model with computers.

During an earthquake, high-frequency seismic waves cause major damage because the resonance frequency of most man-made structures ­— homes, bridges, roads — falls within their frequency range. Resonance frequency is the tendency to naturally oscillate at certain frequencies. [Video: Devastating Earthquake Visualized]

"The higher frequencies in Tohoku weren't quite expected. We've pointed to the direction that they are a function of healing time, and we've put meaning to their observations," Glaser told OurAmazingPlanet.

To create the high-frequency waves, McLaskey and his colleagues first built a fault model out of 8-inch (200-millimeter) Plexiglas blocks. The soft blocks are a good analog for rocks, Glaser said. To better mimic a real fault, the team roughened up the surface of the blocks where they met.

The researchers tested their lab observations against records of repeating earthquakes along the San Andreas Fault. The data were from Parkfield, Calif., one of the most intensely documented earthquake-producing regions in the world.

Thomas and McLaskey explored the records of very small, otherwise identically repeating earthquakes at Parkfield to show that the quakes produced shaking patterns that changed depending on the time span since the last event, just as predicted by the lab experiments. Measurements of the ground motion generated from each of the small earthquakes confirmed shaking at Parkfield was faster when the time from the last rupture increased.

"It is elegant work," said seismologist John Vidale, a professor at the University of Washington who was not associated with the study. "The point that more healed faults can be more destructive is dismaying. It may not be enough to locate faults to assess danger, but rather knowing their history, which is often unknowable, that is key to fully assessing their threat," Vidale said in a statement.

The researchers plan to move their experiments into bigger-scale rock models, and to further investigate the triggering mechanisms of earthquakes.

"It's a big leap between the laboratory and an actual fault, but this does bring us one step closer in that we're starting to learn some of the underlying physics and link it to the way earthquakes are created," McLaskey said.