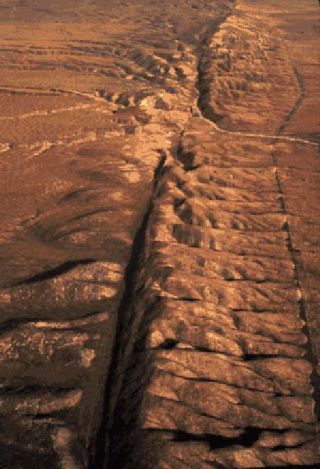 It is highly unlikely that large destructive earthquakes will rock central California along the San Andreas Fault because the minerals there are weak, a new study finds.

This weakness causes the fault to regularly creep along instead of suddenly rupturing in dramatic catastrophes, researchers explained. (Those living along northern and southern portions of the San Andreas Fault, however, still remain at risk for major quakes.)

Investigators analyzed rock samples from a zone 1.6 miles (2.7 kilometers) deep in an actively slipping part of the San Andreas Fault, which runs along the coast of and through California for about 800 miles (1,300 km).

"This section of the San Andreas Fault is known for small, magnitude 2 repeating earthquakes," said researcher Brett Carpenter of Penn State University. "It is thought that in these events, a small patch breaks repeatedly about every two years."

They found the minerals there were very weak where the fault is creeping at present, meaning the fault sees very little resistance to movement. In addition, they discovered that unlike in the surrounding rock, bonds in the material that fill the fault do not heal after bursting, adding to the fault's weakness.

Their data suggests that a magnitude 6 earthquake, such as the one that hit Parkfield farther south in California in 2004, was "highly unlikely" in central California along the San Andreas, Carpenter told OurAmazingPlanet.

"The material in the fault is not strong enough to store the energy required for such an event," he explained.

In the future, Carpenter will continue to study the mechanical behavior of various types of faults. He is already involved with projects on the Alpine Fault — which runs almost the entire length of the South Island of New Zealand — and the Rocchetta Fault in Italy.

The scientists detailed their findings online Feb. 27 in the journal Nature Geoscience.