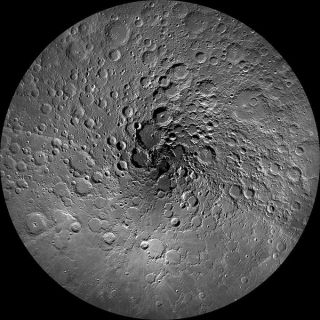 Mosaic of 983 images taken by the Lunar Reconnaissance Orbiter over a one month period during northern summer.
(Image: © NASA/GSFC/Arizona State University)

Here's a view of the moon you'll never see from Earth.

NASA scientists created this mosaic by stitching together 983 images of the moon's North Pole region taken by the Lunar Reconnaissance Orbiter (LRO). The LRO robotic probe, which has been mapping the moon from above since 2009, has acquired thousands of wide-angle camera shots of its polar regions.

Because the mottled moon only tilts on its axis at an angle of 1.54 degrees (as compared to Earth's 23.5 degree tilt) some of its surface never sees sunlight. One goal of the LRO mission is to identify these regions of permanent shadow. The probe took the photos in the composite image above at the height of summer in our satellite's northern hemisphere the time when the pole is best illuminated. Thus, dark areas, such as those along the inside rims of deep craters and the immediate vicinity of the pole, are probably permanently dark.

The craters around the pole appear to spiral out from it. According to Mark Robinson, principal investigator of the LRO team based at Arizona State University, this is an optical illusion.

"Imagine a series of very narrow pie slices collected 12 times each day, one after another," Robinson told Life's Little Mysteries. "It takes roughly 360 slices to fill in the whole pie. Each day the sun direction is progressing around the moon, thus the direction that the sun is striking the surface changes. So the shadow directions slowly progress around the moon, thus leading to the illusion."