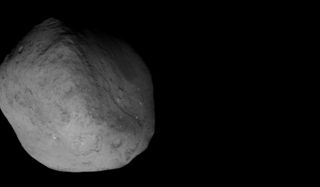 The Stardust-NExT probe took photos of the comet Tempel 1 at approximately 11:35 p.m. EST yesterday (Feb. 14), but the images weren't beamed back to Earth until about four hours later. Photos from deep space often take a while to come in, for various reasons, but the Stardust images took longer than most.

"A number of things contributed to us receiving the images later than we expected, including the order in which we received the images, weather conditions, the spacecraft's range and the processing of the images," Randii Wessen, a spokesperson and engineer for JPL, told Life's Little Mysteries.

The plan was to first transmit the images that Stardust took when it was closest to Tempel 1, at a distance of 112 miles (181 kilometers) away. Although Stardust continuously took photos as it approached the comet, passed alongside it and looked backward at it, mission controllers at NASA's Jet Propulsion Laboratory (JPL) in Pasadena, Calif., wanted to get the closest shots of Tempel 1 transmitted first.

"The best images were taken during the middle of the flyby, and we wanted five images from the middle to be sent to us first," Wessen said. "But instead, the images were transmitted to us sequentially, with 72 images total."

Stardust is operating 209 million miles from Earth, and Wessen estimates that it took 18 to 19 minutes for the images to arrive. (By comparison, a similar radio transmission from the moon would take about a second-and-a-half to reach Earth.) Because the images were transmitted one by one, it took significantly longer for the "good stuff" to get to Earth.

Wessen said that he didn't know why the middle images weren't sent first as planned, but that no data had been lost it just took longer for the JPL team to get the best approach images because they had to wait for Stardust to transmit them.

Additionally, rain clouds over Madrid slowed the data download to one of the three dish antenna sites that comprise the Deep Space Network (DSN), which is responsible for receiving raw data from Stardust-NExT and other spacecrafts .

Once the images arrive, it takes a little while to make them presentable to the public. The raw radio frequency data that is sent from Stardust to the JPL has to be processed into binary digits, which are codes made using only the numbers 0 and 1. This information is then translated into a high-resolution image, or frame, that JPL engineers manipulate to make the photo clearer and brighter. Wessen likens this process to turning up the contrast option on a TV screen in order to improve the quality of the picture.