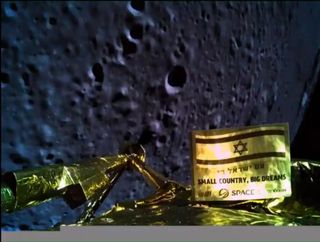 Israel's Beresheet spacecraft captured this selfie during its landing maneuver on April 11, 2019. That maneuver was unsuccessful, and the probe slammed hard into the lunar surface.
(Image: © SpaceIL/IAI)

WASHINGTON — Israel had pinned its hopes on becoming the fourth country to land softly on the moon, and although the country's team failed on the first try, it still intends to try to claim that coveted title.

The Beresheet mission attempted its landing in April, but a computer glitch late in the process meant the spacecraft didn't slow down properly during its descent. Six months later, a representative of Israel's government-owned aerospace manufacturer gave attendees gathered here for the 70th International Astronautical Congress a recap of what went wrong — and an introduction to what Israel hopes to do next at the moon.

"We are very proud and happy with the Beresheet mission," Ehud Hayun, a space systems engineer at the Israel Aerospace Industries, which built the spacecraft, said yesterday (Oct. 22). "It was the first of many. It's made us the seventh country to orbit the moon, fourth to attempt landing." (The slides he presented added to that list the claim that Israel became the third nation to land too fast on the moon.)

Beresheet was designed to be as cheap as possible, with the mission price tag coming in around $100 million, Hayun said. "We have little to no redundancy in the systems," he said. "This makes it very cheap, but also very risky."

The mission had to tackle several challenges and anomalies on the way to the moon landing, Hayun said. The long, circuitous path to the moon that allowed a cheaper launch exposed the spacecraft to more radiation. The computer on board the spacecraft reset a few times along the mission, and a reset late in the landing overrode vital patches, prompting the landing anomaly, Hayun said.

But despite the hard landing, Israel has no intent to stop chasing the moon, Hayun said. (Shortly after the crash, the SpaceIL organization behind the mission suggested it would target a different destination than the moon; it's unclear what will happen on that front.) The team behind Beresheet has mostly stayed on, he said during his presentation, and they intend to fly a new version of the lander within two or 2.5 years.

The successor spacecraft would include some design tweaks meant to increase the mission's odds of landing softly. New versions will carry upgraded computers and, unlike the original Beresheet spacecraft, will be armed with an obstacle-avoidance system for landing. But Israel's future landers will still be compact and still work with rideshare launches, Hayun said.

And next launch, the team will have a leg up: They've done this once already. "On the technical level, things were very difficult because we had a huge task defined: the first low-cost lunar mission," Hayun said. "We had no reference to look at. It's never been done before."