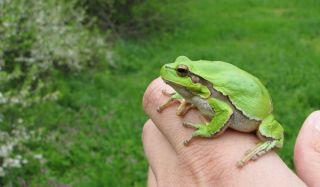 More than 100 volunteers in Philadelphia are taking part in the city's third annual "Toad Detour" an effort to help frogs safely cross a local road in order to reach their mating ground.

Held in the Roxborough neighborhood, the event helps American toads leave the forests of the 350-acre Schuylkill Center for Environmental Education, where they hibernate during the winter , and cross the road that separates the forest from an old reservoir where the toads go to mate.

The Toad Detour rallied about 150 local citizens and officials from various agencies such as the Philadelphia Parks and Recreation Department and the city's police department. During the event's opening day on March 10, the roads that the toads need to cross were barricaded, and since then, daily shifts of volunteers have ensured that the frogs safely reach the Roxborough reservoir.

Before the Toad Detour was established, mating season for the little green creatures meant having to hop across Hagys Mill Road, Eva Street or Port Royal Road at night amidst oncoming traffic. Hundreds of toads were killed each year by motorists as the amorous amphibians attempted to make the dangerous journey.

Now, no cars are permitted on Port Royal between Hagys Mill and Eva between the hours of 7 and 9 p.m. Traffic will continue to be diverted from the streets each evening until April 15, or for the entire duration of the frogs' month-long breeding season . An estimated 2,000 frogs were saved during last year's Toad Detour.