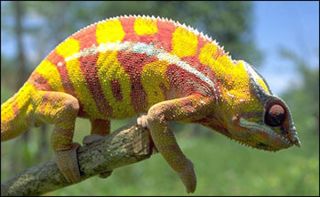 Contrary to popular belief, chameleons don't change their colors to blend in with their surroundings. In fact, although their natural camouflage serves several purposes, the primary function of the color shift is to alert neighbors of danger.

Most chameleons and some species of anole and gecko lizards are able to change their skin color to some degree. There are approximately 160 species of chameleons, but not all of them are able to switch to brilliant shades like the one in the video below. Many species, such as the Namaqua Chameleon and Brygoo's Chameleon, can only turn from brown or gray to green and back again.

Chameleons take on shades that are within the range of colors that their species has evolved to possess, and these hues can include everything from aquamarine blue to pale pink and even patterned stripes and spots. Other chameleon species are limited to shifting between only a few specific colors, such as red, yellow and green.

Color-changing lizards have a transparent outer skin, with several layers of skin underneath. These layers contain tightly connected cells called chromatophores, which reflect light and are full of the natural pigment melanin . When a lizard experiences changes in body temperature, mood or stress levels, neurotransmitters signal specific chromatophore cells to contract or expand.

The speed at which a lizard changes its color varies, but "under the right conditions, it may take only seconds," said Jonathan A. Campbell, chairperson of the biology department at the University of Texas at Arlington and researcher of herpetology, or the study of amphibians and reptiles. "Sometimes, such as with slow temperature change, color changes more slowly."

For example, when the sun is rising after a cold night, a normally light brown chameleon's chromatophores will expand, causing its skin to take on a dense, dark chocolate color that will absorb light and warm the lizard's body. If the lizard becomes too hot after baking in the afternoon sun, its dark chromatophores will contract, diminishing the brown pigmentation and allowing the chameleon's lighter, tan skin color to shine through, reflecting the sun's rays.

Changing colors is also a way of communicating. The males of some chameleon species will change color when they are preparing to fight, Campbell said. For example, when a Panther Chameleon which is normally blue or green with a white horizontal stripe becomes angry or feels threatened, its red chromatophores fully expand, blocking out the green and blue colors in the skin layers underneath. The vivid reds act as a warning to other chameleons that they should stay away.

Chameleons also use colors to broadcast their sexual availability. A male Panther Chameleon looking for a mate will show off a colorful mix of blue, green, orange, yellow, red and white in an effort to impress females . Female Panther Chameleons, which are generally tan brown with pink or coral accents, turn dark brown or black with orange stripes when they are pregnant, sending a clear signal to males that they aren't interested in mating.