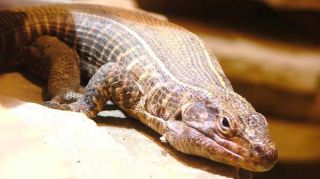 Reptiles use the environment to regulate their warmth. This strategy helps them conserve energy in the cold and rapidly ramp up their body temperature in the heat, but it also makes them particularly sensitive to global warming.

For most lizards and snakes, cooling down is as easy as moving into the shade or hiding under a rock, said Jack Conrad, a research associate at the American Museum of Natural History in New York and a specialist in reptile biology. Reptiles warm up just as simply, by basking in the sun.

However, some very large and very small reptiles regulate their temperature a bit differently.

Very big lizards like the Komodo dragon have so much mass that their bodies trap a lot of heat, allowing them to maintain a fairly consistent body temperature, almost like a mammal, Conrad said.

But for small lizards , maintaining this consistency is more difficult. Their bodies cool down and heat up when the air around them changes temperature even slightly. Small lizards can feel changes as subtle as the sun moving behind a cloud, and their metabolisms slow down to a level near that of hibernation when they rest in the shade, Conrad said. Then, when they move into the sunlight, the lizards become hyperactive.

Because they draw heat from the environment, instead of relying on the complicated internal mechanisms that mammals have to regulate their temperature, lizards can survive on far less food than mammals, Conrad said. In fact, some reptiles can go an entire year between meals thanks to this lifestyle, Conrad added.

But a life so dependent on small variations in temperature also makes climate change particularly dangerous for reptiles.

Even 30 years ago, when people were just beginning to detect something going on with the climate, one of the first groups they looked at was forest lizards, Conrad said. If the climate change is dramatic, you will see a lot of diversity go away. There are about 9,000 lizards and snakes living today, and you will see that number drop dramatically.