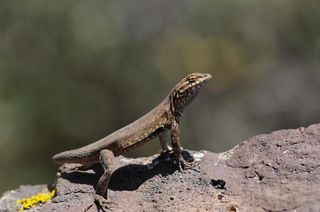 Lizards work out for the same reason a guy at the gym might: as a display of strength. And with lizards, as can be the case with men, the push-ups also mean "get out of my territory."

And a new study finds some lizards make a morning and evening routine out of the displays.

Four species of male Jamaican lizards called anoles greet each dawn with vigorous push-ups, head bobs and a threatening extension of a colorful flap of skin on the neck. They repeat the ritual at dusk.

Other creatures, from birds to reptiles to primates, are known to mark dawn and dusk with various sounds. But this is the first such ritualistic visual display of territorialism known, said Terry J. Ord, a postdoctoral researcher at Harvard University's Museum of Comparative Zoology and at the University of California, Davis. The research will be detailed in an upcoming issue of the journal American Naturalist.

"Anoles are highly visual species, so in that sense it's not surprising that they would use visual displays to mark territory," Ord said. "Still, the finding is surprising because these are the first animals known to use non-acoustic signaling at dawn and dusk."

Female anoles establish small territories for food and other resources. Males stake out larger territories, in which they have access to several females, Ord found. The males spend much of the day sitting on tree trunks doing their calisthenics to warn away other males.

"As in humans, if an anole can do many of these push-ups, it shows that he is in prime physical condition," Ord said. "These displays of strength help avert actual physical confrontations between male lizards, which can be very fierce and destructive."

Ord videotaped individual males at different times of day, from before dawn to dusk. He found distinct peaks of activity at daybreak and for about two hours afterward, and again just before dark.

"These patterns have remarkable parallels with the dawn and dusk choruses reported for many acoustically communicating animals," Ord says.

Ornithologists don't all agree on the exact reasons why birds sing at dawn and dusk. It could be for territorial defense or to communicate something about their environment. But Ord says his work suggests male anoles use their morning displays primarily to mark territory.

Anyone who has ever seen a lizard doing push-ups might wonder if they're trying to scare the human observer away or if, rather, the observer just happened to come along at the right time. Ord thinks it's probably the latter.

"We just happen to be around when they're displaying," he told LiveScience. "These animals display a lot even when no other lizards seems to be around. But in my experience, there's probably another lizard over your shoulder somewhere that you don't see, and that's who they are displaying at."

However, the push-ups might be a signal to us, Ord explained.

Gazelles are known to let predators know that they know they're being watched, as if to say: "Hey, buddy, the element of surprise is gone. I'm fit and I will escape if you try anything."

"In the case of gazelles, the predator [such as a lion] gives up stalking them," Ord explained. "Some have said that might also be why lizards might display to us, although the jury is still out on that one."