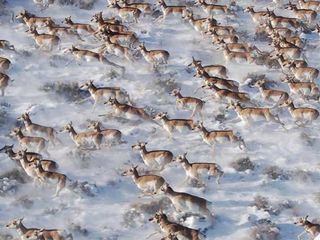 Birds do it. Fish do it. Mammals, insects and reptiles do it. Migrate, that is.

Migration is nearly universal within the animal kingdom; in fact, even sponge and jellyfish larvae make use of that defining animal trait, mobility, to adapt to imperfect habitats. Animals across the globe fly, swim, walk or drift in their effort to find food, a more hospitable climate or places to breed.

These primal drives lead to arduous and often treacherous treks, some spanning thousands of miles.

Humpback whales top the list of lengthy mammal migrators, traveling as much as 5,000 miles (8,047 kilometers) one way. One generation of monarch butterflies flutters some 2,000 miles (3,219 km) between southern Canada and central Mexico. A shorebird called the bar-tailed godwit holds the record for the longest nonstop flight: 6,835 miles (11,000 km) in eight days. [Album: Quest for Survival: Incredible Animal Migrations]

Then there are the enormous effort a salmon displays to reach its breeding grounds, only to die there; the three-mile (five-kilometer) crawl through numerous obstacles undertaken by red crabs on Christmas Island; the 300-mile loop taken by zebras and wildebeest in Africa, following seasonal rains, and many more.

So why do they do it? Migration is driven by a simple fact: Resources on Earth fluctuate. Warm summer months may be followed by inhospitable cold. Plants – or other meals – may be abundant, but only for a short time. The best place to give birth or hatch young may not be a good place to find food.

And why not find a shorter, simpler journey or stop altogether? "The simple answer is that the benefits of long-distance migration outweigh its cost and the benefits of shorter distances," Hugh Dingle, a professor emeritus at the University of California, Davis, told Life's Little Mysteries.

There is incredible diversity in animal migrations, and while science has pinned down certain aspects, much about them remains a mystery.

While migrations can be complex and varied, the motivations behind them are simple. Food, breeding and climate are recurring themes.

For humpback whales, the best place to feed isn't the best place to breed. During the warm months, these whales feed in nutrient-rich waters of the high latitudes. However, they mate and calve in warmer waters that contain little food, so after these whales have journeyed as much as 5,000 miles (8,047 km) to their breeding grounds, they will fast throughout the winter.

In North America, pronghorn antelope follow new greenery as they travel north from their overwintering grounds in the Upper Green River Basin in Wyoming to their summer territory in Grand Teton National Park. Their return trip, in autumn, is a necessity because the antelope would not survive the deep snows in the north — and their journey must begin before snow blocks their return route through the Gros Ventre Mountains.

In autumn, one generation of monarch butterflies, the migrant generation, flies to central Mexico for the winter from as far north as Canada. The same insects start the return trip but stop in the southern United States, where the females lay eggs and pass the baton onto a new generation. This happens at least once more before the butterflies reach their summer destination. While it is believed that the butterflies travel north following the emergence of milkweed, which is the plant that hosts their young, the reasons for their trip back south aren't fully understood, according to Steven Reppert, a neurobiologist at the University of Massachusetts Medical School.

Aphids' annual migrations — from an overwintering site and between plants as they search for fresh greenery — also spans multiple generations. Their trips can be as short as a few hundred meters or as long as several thousand up the Mississippi Valley from Texas to Illinois on prevailing springtime winds, according to Dingle.

For the Pacific salmon, migration defines its lifespan. After spending their adult lives in the ocean, these fish journey against the current of the freshwater rivers where they hatched. Once home, they spawn and die. It's a difficult and dangerous task: Only one out of a thousand salmon may live to return to the stream where it was hatched, according to the U.S. Fish & Wildlife Service.

Red-billed queleas, an avian agricultural pest in Africa, have a migration pattern that appears erratic. The birds feed on seeds, so once a rainy season has started and seeds germinate, the birds are forced to move. Eventually, the rain fronts catch up with the birds, and they fly back to places where the rains began, where they breed. They may later move and breed again in the same season, according to Robert Cheke, a researcher with the Natural Resources Institute.

Desert locust invasions are also complex. Under normal conditions, desert locusts behave like grasshoppers and do not swarm — but after a period of good breeding conditions, once populations reach a critical density, their color and behavior change. The locusts begin to swarm and migrate downwind to find green vegetation to eat and damp environments in which to lay their eggs, a phenomenon that earned them a place in the Bible.

Natural selection shapes these journeys, and it has programmed this traveling nature into many animals, putting a destination in their genes. But the innate sense that points these migratory animals in the right direction has remained something of a mystery.

For instance, direction and distance must be encoded in a songbird's genes, because young birds make their first flight alone, according to Susanne Åkesson of Lund University in Sweden. The birds also have a genetically based internal clock that allows them to synchronize their behavior – whether preparing for migration or becoming sexually active – with the seasons.

The genetic structure of these abilities is not well understood, Åkesson said.

Scientists do know, however, that migrants can use the sun, the stars, reflected light, the Earth's magnetic field and their sense of smell to find their way.

Regardless of its genetic components, migration is not mandatory. In the early 1900s, the pronghorn antelope population, for example, stopped migrating as their numbers dwindled. After roughly 50 years, the pronghorn population in Wyoming returned a certain level and the migration resumed, according to Jon Beckmann, an associate conservation ecologist with the Wildlife Conservation Society.

"If you don't have any need to change environments, you might not just activate this program encoding the activity to move from a certain area," she said. "But maybe the capability is present in most birds."

Migrants have evolved to respond to cues, such as changes in day length, that tell them it's time to move. Waiting too long brings a number of risks, including losing the opportunity to stock up on food before departure or losing the competitive edge that comes with early arrival at your next habitat.

In addition to being pre-emptive, the travelers are focused. They don't meander, and they aren't distracted by food or mates along the way. The migrant generation of monarch butterflies is unable to reproduce until after it has reached its southern destination. And migrating aphids are initially drawn to the blue light of the sky, then, as their journey progresses, to the yellow light reflected by their preferred food, young leaves.

Single-mindedness makes sense, Dingle said. "If you get distracted, you are not going to get where you need to go."

How do they do it?

In addition to guiding migrants to a tried-and-true destination, natural selection has taught many migrants how to take advantage of winds or currents that will aid or even carry them to their destinations.

"You evolve to take advantage of abilities that already exist," Dingle said. "Birds already can fly, to take the simplest case, so instead of just restricting flights to short distances, you evolve a mechanism to take flights to long distances."

Research on migrating birds showed that, the more rounded their wings were and the more weight they carried per wing area, the greater their heart rates and energy expenditures were. The birds could make their flights more energy-efficient by avoiding high winds and turbulence.

Migrating animals also have to prepare. The bar-tailed godwits stuff themselves, more than doubling their weight before they begin their autumn flight, according to Anders Hedenström from Lund University. They also increase the mass of their flight muscle slightly, but over the course of the flight, it is partially consumed, and they lose weight elsewhere by shrinking their intestines and liver. During a long, snackless flight, these organs make for unnecessary payload, Hedenström said. Similar physiological changes have been observed in other migrating birds.

Their journeys aren't easy; migrants fast, swim upstream, fly nonstop, and face hungry predators and barriers built by humans. The journeys may be fatal to some; however, mortality data is difficult to obtain, according to Dingle.

"My own suspicion is that it's a lot less than people think. They just seem able to do it well," he said.

Wynne Parry is a Senior Writer for LiveScience, a sister site of Life's Little Mysteries.