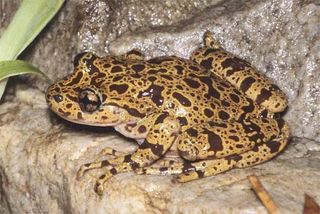 Changes in the environment are greatly affecting frogs around the world.
(Image: © Richard Boycott, ZSL)

Kermit the Frog is more right now than ever: It’s not easy being green. Or any other color of frog, toad or other amphibian in the world, as rapid changes in the environment are killing off frogs left and right.

Though fungi and habitat destruction have been implicated in the disappearances, the frogs’ plight comes down to one problem: Amphibians are extremely sensitive to changes in their environment, a study published in the journal BioScience finds.

Amphibians’ physiology (permeable skin) and complex water-and-land life cycle expose them to more environmental changes than most animals, and though they have survived climate changes before, today's changes are accelerating too rapidly for frogs to keep pace.

Also, frogs’ eggs have no shells, exposing embryos to increased UV-B radiation levels, which can cause harmful mutations. Pollution has contaminated the water frogs thrive in and global climate change is causing higher levels of infectious diseases.