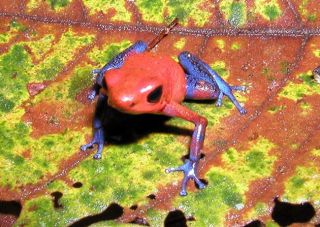 Oophaga pumilio, the strawberry poison frog, is one of a number of species of amphibians and reptiles declining in lowland forests of Costa Rica.
(Image: © Steven M. Whitfield)

As if frogs and other amphibians around the world didn’t have enough to worry about with a killer fungus spreading rapidly and humans encroaching on their habitats, now global warming seems to be affecting one of the few pristine habitats the frogs have left, a new study suggests.

More than one third of amphibian species in the world today are threatened, and it is estimated that more than 120 species have disappeared since 1980.

A lack of long-term data on frog populations has made it difficult to determine the causes of these declines, especially in areas far from the effects of humans.

Scientists know a pathogen called a chytrid fungus is causing an infection in the skin of frogs in epidemic proportions in cool, high-altitude areas, preventing their skin from taking in enough water and causing them to die of dehydration.

But the fungus fails to explain all of the decline in frog numbers in warmer, low-altitude environments where it cannot thrive as well, so a group of scientists decided to investigate at La Selva Biological Station, a pristine lowland forest in Costa Rica.

The case at La Selva

They found that the population density of all the land-dwelling amphibian species at La Selva had declined by 75 percent since 1970.

While the declines are not as rapid as those caused by the fungus, which can completely wipe out an entire species in a matter of months, the scientists still found them alarming, because something was “affecting species that biologists haven't been primarily concerned about,” said study team member Steven Whitfield of Florida International University in an email.

Though the fungus may be affecting frogs at La Selva, something else seemed to be killing the frogs the scientists studied. The number of reptiles, which are not affected by the fungus, has also been dropping, pointing to another cause. (Researchers also later tested frogs for the fungus but found no sign of it.)

Instead, the culprit at La Selva seems to be climate change. Records have shown increasing daily minimum temperatures and more days with rainfall in the area since the 1970s and 80s. As the environment becomes increasingly warm and wet, fewer leaves might fall from the trees. This leaf litter is a key part of amphibian and reptile habitats in the area as it provides them with shelter, food from the insects that decompose the litter and a means of trapping moisture for their skin.

The research is detailed in the online early edition of the Proceedings of the National Academy of Sciences.

This new study was important because it was one of the first to look at long-term changes in frog populations and gives scientists an idea of what to investigate next, said Karen Lips of Southern Illinois University, who was not affiliated with the study.

Without longer-term data from place other than La Selva, the researchers cannot say whether the gradual decline observed there is occurring elsewhere. But researchers worry that if gradual declines are happening, they won’t be noticed because of the more rapid die-offs caused by the chytrid fungus, which is still considered the primary threat to amphibians.

“Globally, the fungus problem is still a far greater threat than litter reduction,” Whitfield told LiveScience. “The fungus affects far more species, has been implicated in numerous extinctions, and is turning up all over the world.”