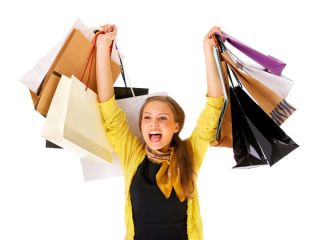 Marked-down merchandise. Stores that open before the crack of dawn. Huge and possibly dangerous crowds. All are signs that Black Friday is upon us. And Cyber Monday, one of the biggest online shopping days of the year, is just around the corner. But how did these days earn their names?

The term "Black Friday" wasn't originally associated with bargain-busting sales. In fact, in its first incarnation, the term signaled that something had gone horribly wrong with the economy. "Black Friday" was first used to describe Sept. 24, 1869, when several financiers tried to corner the gold market and instead crashed the market and caused an ensuing depression. In 1873, another panic in the financial markets also began on a Friday.

The Great Depression was precipitated by the Oct. 29, 1929, start of the stock market collapse . But that was Black Tuesday. Another bad day for the stock market, Oct. 19, 1987, was called Black Monday.

The term "Black Friday" is now applied to the big shopping day after Thanksgiving.

You might think it describes the bleak scene of hordes of shoppers shoving each other aside to snag the last DVD player on the shelf. But actually it's because the day is when retailers' balance sheets supposedly move out of the red (accountants use red ink in a ledger to indicate losses) and into the black (the color of ink you want to see if you have a really high-paying job as a CEO).

The other way of putting it: If the annual shopping on Black Friday does not go well, then the whole year, at least from an individual company's perspective, can turn out a lot like the other black days in history.

The more recent development of Cyber Monday, which takes place right after the Thanksgiving holiday weekend, has been a bright spot for tech in recent years, as shoppers go online to take advantage of sales they may have overlooked at the stores. It occurs on Monday because that's when folks go back to work after the holiday weekend and spend their downtime trolling websites for holiday deals.

"Cyber Monday" was unofficially coined in 2005, and the day has become one of the busiest for online retailers: According to comScore, $887 million was spent on Cyber Monday in 2009 (not including travel purchases), making it the second-highest spending day of that year. It's profits like that that have companies looking to cash in even more on the Web. Walmart, for instance, is now hoping to turn Cyber Monday into Cyber Week by extending its sales and offering steep deals on consumer electronics.