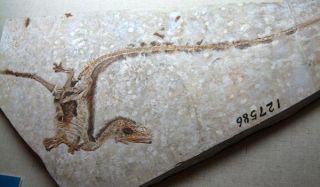 Love-hungry teenagers and archaeologists agree: dating is hard. But while the difficulties of single life may be intractable, the challenge of determining the age of prehistoric artifacts and fossils is greatly aided by measuring certain radioactive isotopes. Until this century, relative dating was the only technique for identifying the age of a truly ancient object. By examining the object's relation to layers of deposits in the area, and by comparing the object to others found at the site, archaeologists can estimate when the object arrived at the site. Though still heavily used, relative dating is now augmented by several modern dating techniques. Radiocarbon dating involves determining the age of an ancient fossil or specimen by measuring its carbon-14 content. Carbon-14, or radiocarbon, is a naturally occurring radioactive isotope that forms when cosmic rays in the upper atmosphere strike nitrogen molecules, which then oxidize to become carbon dioxide. Green plants absorb the carbon dioxide, so the population of carbon-14 molecules is continually replenished until the plant dies. Carbon-14 is also passed onto the animals that eat those plants. After death the amount of carbon-14 in the organic specimen decreases very regularly as the molecules decay. Carbon-14 has a half-life of 5,730 ± 40 years, meaning that every 5,700 years or so the object loses half its carbon-14. Samples from the past 70,000 years made of wood, charcoal, peat, bone, antler or one of many other carbonates may be dated using this technique.