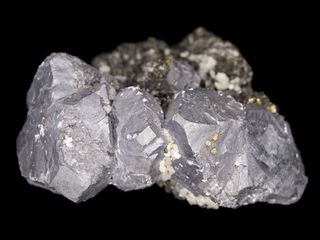 Lead is an incredibly useful metal, but it is also toxic to humans. In fact, if we didn't have to worry about breathing in its dust or ingesting its particles, lead would be in widespread use due to its highly industry-friendly properties, such as excellent malleability and corrosion resistance.

Throughout history — before the scientific advancements of the 20th century revealed its potent toxicity — lead was widely used in a variety of products, including cosmetics, paint, solder, pipes and gasoline. Certain properties of lead, namely its ductility and resistance to corrosion and tiny leaks, make it a particularly good material for constructing water pipes. Even the ancient Romans made their water pipes out of lead, causing some to believe that lead poisoning, at least partially, led to the fall of the Roman Empire.

Lead is a highly lustrous, bluish-white element that makes up only about 0.0013 percent of the Earth's crust, according to the Jefferson Lab. It is not considered rare, however, since it is fairly widespread and easy to extract. Lead typically occurs in very small amounts in ores such as galena, anglesite and cerussite. Lead is commonly mined and smelted in Missouri, Idaho, Utah, Colorado, Montana and Texas, according to Plumbing Manufacturers International. About one-third of the lead in the United States is recycled.

The chemical symbol for lead is Pb, which comes from the Latin word plumbum, meaning "waterworks," referring back to ancient times when the metal was widely used in the construction of water pipes. Although there are 27 lead isotopes, only four are considered stable.

Although lead has been phased out of many of its previous uses, this non-corrosive metal is actually quite useful in products that hold or touch highly acidic substances. For example, lead is used to line tanks that hold corrosive liquids, such as sulfuric acid. It is also used in lead-acid storage batteries, such as those found in automobiles.

Because of its density and ability to absorb vibration, lead also makes an excellent shield against different types of harmful radiation, such as those found in X-ray machines and nuclear reactors, according to Jefferson Lab. Lead is also still used in some bullets and ammunition.

Tetraethyl lead was added to gasoline in the 1920s to help reduce engine knocking, wear and tear and pre-ignition. Almost immediately, industry workers started to become extremely ill and some even died. At Dupont's manufacturing plant in New Jersey, it was particularly bad — eight workers died between 1923 and 1925. Finally, after 44 workers at Standard Oil's plant had been hospitalized, public awareness and outcry finally began to gather steam, according to Chemistry LibreTexts. Although the U.S. Public Health Service held a conference in 1925, lead was ultimately allowed to remain in gasoline for decades in spite of all the damage it was causing. It wasn't until the late 1970s that leaded gasoline started to get phased out. It was finally banned for all on-road vehicles in 1996.

Since lead was used in so many products before people recognized the extent of its toxicity, it continues to pose a real public health danger today. For example, children living in older homes can still breathe in or ingest dust or paint chips from peeling lead paint on the walls. Lead can also leach into the drinking water supply through older, corroded lead pipes, faucets and solder. Nearly all homes built before the 1980s have lead solder connecting to copper pipes, according to Plumbing Manufacturers International. Even some major U.S. cities still use lead pipes to carry water from the utilities to our homes and businesses. When the water chemistry is very carefully controlled, however, it keeps lead from leaching into the drinking water.

Most cases of lead poisoning are due to chronic low-dose exposure. Since symptoms of slow lead poisoning are mainly emotional and mental in nature, lead poisoning may be the last thing people suspect. Children are at the greatest risk. Lead can delay physical and mental development in babies and young children. In adults, slow accumulation of lead can result in kidney and nervous system damage, anemia, stroke or cancer, according to Utah State University.

Quan Lu is an associate professor of environmental genetics and pathophysiology at Harvard T.H. Chan School of Public Health. He is the senior author of a recent study investigating the harmful effects of lead on neural stem cells and children's neurodevelopment.

"While acute poisoning of lead (Pb) can cause abdominal pain, weight loss, vomiting and even death, the majority cases of Pb exposure in children are chronic and low-dose," said Lu. "Pb exposure in children has been consistently linked to impaired neurological development and cognitive dysfunction as well as persistent antisocial and delinquent behavior."

"Pb disturbs neuronal function. Pb neurotoxicity is determined by intricate interplays between the metal and target neural cells, and there is overwhelming evidence documenting the detrimental effects of Pb in neurons," he told Live Science.

One of the most notorious cases of lead leaching into drinking water occurred recently in Flint, Michigan. In an effort to save money, officials had decided to switch the source of the city's drinking water from the Detroit Water and Sewerage Department (DWSD) to the Karegnondi Water Authority (KWA). In the meantime, however, they would need to pull water from the Flint River, beginning on April 25, 2014.

Within weeks, Flint residents began to complain about the smell and color of their tap water. Tests revealed high levels of E.coli and total coliform bacteria in the water supply, which prompted the city to chlorinate the water at higher-than-usual levels. This chlorination, in addition to the fact that they had not implemented any corrosion protection, caused massive pipe corrosion, allowing lead to leach into the drinking water.

In many homes, the levels of lead in the drinking water were far above the Environmental Protection Agency's maximum safety level of 15 parts per billion (ppb). In fact, the water in one home was tested by Virginia Tech researchers as having lead levels at 13,200 ppb — over three times the level considered to be hazardous waste. Unfortunately, a child living in that home was diagnosed with lead poisoning.