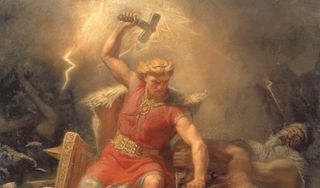 Named for the Norse god of thunder, thorium is a silvery, lustrous and radioactive element with potential as an alternative to uranium in fueling nuclear reactors.

In 1815, Jöns Jakob Berzelius, a Swedish chemist, first thought he had discovered a new Earth element, which he named thorium after Thor, the Norse god of war, according to Peter van der Krogt, a Dutch historian. In 1824, however, it was determined that the mineral was in fact yttrium phosphate.;

In 1828, Berzelius received a sample of a black mineral found on Løvø Island off the coast of Norway by Hans Morten Thrane Esmark, a Norwegian mineralogist. The mineral contained nearly 60 percent of an unknown element, which took over the name thorium; the mineral was named thorite. The mineral also contained many known elements, including iron, manganese, lead, tin, and uranium, according to Chemicool.

Berzelius isolated thorium by first mixing thorium oxide found in the mineral with carbon to create thorium chloride, which was then reacted with potassium to yield thorium and potassium chloride, according to Chemicool.

Gerhard Schmidt, a German chemist, and Marie Curie, a Polish physicist, independently discovered that thorium was radioactive in 1898 within a couple months of each other, according to Chemicool. Schmidt is often credited with the discovery.

Ernest Rutherford, a New Zealand physicist, and Frederick Soddy, an English chemist, discovered that thorium decays at a fixed rate into other elements, also known as the half-life of an element, according to Los Alamos National Laboratory. This work was critical in furthering the understanding of other radioactive elements.

A great deal of research is going into using thorium as a nuclear fuel. According to an article from the Royal Society of Chemistry, thorium used in nuclear reactors provide many benefits over using uranium:

According to a 2009 paper by NASA researchers Albert J. Juhasz, Richard A. Rarick, and Rajmohan Rangarajan, thorium reactors were developed at the Oak Ridge National Laboratory in the 1950s under the direction of Alvin Weinberg for supporting nuclear aircraft programs. The program stopped in 1961 in favor of other technologies. According to the Royal Society of Chemistry, thorium reactors were abandoned because they did not produce as much plutonium as uranium-powered reactors. At that time, weapons-grade plutonium, as well as uranium, was a hot commodity due to the Cold War.

Thorium itself is not used for nuclear fuel, but it is used to create the artificial uranium isotope uranium-233, according to the NASA report. Thorium-232 first absorbs a neutron, creating thorium-233, which decays to protactium-233 over the course of about four hours. Protactium-233 slowly decays to uranium-233 over the course of about ten months. Uranium-233 is then used in nuclear reactors as fuel.