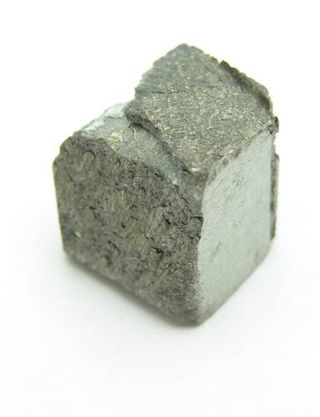 Yttrium was discovered in the late 18th century, but only during the past few decades has this soft, silvery metal found widespread use — in chemistry, physics, computer technology, energy, medicine and other fields.

On the Periodic Table of Elements, yttrium is among the transition metals, which include some more well-known elements, such as silver and iron. Transition metals tend to be strong but pliable, which is why some of them, such as copper and nickel, are widely used for wires. Yttrium wires and rods are also used in electronics and solar energy. Yttrium is also used in lasers, ceramics, camera lenses, and dozens of other items.

However, yttrium is seldom used on its own. Instead, researchers use it to form compounds, such as yttrium barium copper oxide (YBCO) — which helped usher in a new phase of high-temperature superconductivity research. Yttrium is also added to metal alloys to help improve resistance to corrosion and oxidation.

"Like many elements, you won't find yttrium as an element or compound in general use," said Joseph Gambogi, mineral commodity specialist with the U.S. Geological Survey's National Minerals Information Center. "Rather, yttrium and its compounds are added to other materials to enhance properties of other materials."

Mas Subramanian, a professor of materials science at Oregon State University, agreed. "In all of these cases, yttrium is used to make the structures stable." Subramanian and his team at OSU combined yttrium with indium and manganese to form a vivid blue pigment called YinMn Blue. "Manganese is really what gave it color, but yttrium helped hold the structure together," he told Live Science.

In 1787, a Swedish army lieutenant and part-time chemist named Carl Axel Arrhenius discovered an unusual black rock when exploring a quarry near Ytterby, a small town near Sweden's capital city, Stockholm. Thinking he had discovered a new mineral containing tungsten, Arrhenius sent the specimen to Johan Gadolin, a mineralogist and chemist in Finland, for analysis.

Gadolin isolated the yttrium within the mineral, which was later named gadolinite in his honor. Yttrium was named for Ytterby.

In 1843, a Swedish chemist named Carl Gustaf Mosander studied yttrium samples and discovered they contained three oxides. At the time they were called yttria, erbia and terbia. They are now known as white yttrium oxide, yellow terbium oxide, and rose-colored erbium oxide, respectively. A fourth oxide, ytterbium oxide, was identified in 1878.

Though yttrium was discovered in Scandinavia, it is far more plentiful in other countries. China, Russia, India, Malaysia and Australia are the leading producers of yttrium. In April 2018, scientists discovered what they think is a massive deposit of rare earth metals, including yttrium, on a small Japanese island called Minamitori Island.

Yttrium can be found in most of the rare earth minerals, but has never been discovered in the Earth's crust as a freestanding element. Lunar rocks gathered during the Apollo moon missions contain yttrium. The human body also contains yttrium in tiny amounts, usually concentrated in the liver, kidneys, and bones.

Before the era of flat-screen televisions, TV sets contained large cathode ray tubes, which were large glass tubes that projected images on the screen. Yttrium oxide, doped with the element europium, provided the red color on millions of color-television sets.

Yttrium oxide (yttria) is added to zirconium oxide (zirconia) to make an alloy that stabilizes the crystal structure of zirconia, which ordinarily changes with temperature. "Essentially, yttria locks in the cubic structure of zirconia, creating a ceramic with exceptionally high toughness that is suitable for use at very high temperatures," Gambogi said. "This type of ceramic is used in a variety of applications from electronics to thermal barrier coatings on jet engines to medical implants."

Synthetic garnets made with an yttrium-aluminum composite were commonly sold in the 1970s as simulated diamonds and other gemstones, but they eventually gave way to the cubic zirconia, Gambogi said. These days, yttrium aluminum garnets (YAG) are used as the crystals that amplify light in industrial lasers. Yttrium iron garnets are used for microwave filters, as well as in radar and communication technology.

"Although yttrium is found in a multitude of applications, the largest end uses are ceramics and phosphors," Gambogi told Live Science. "Lesser amounts are used in metallurgy, glass polishing and additives, and catalysts. … There also are a multitude of electronic applications, but oxygen sensors are an especially important use."

Yttrium is widely used to produce phosphors that are used in cell phones and larger display screens as well as general lighting. Yttrium in red phosphors in color television tubes led to widespread use in the 1960s and '70s. Fluorescent tubes (linear and compact) use significantly more yttrium per watt than LED bulbs.

The radioactive isotope yttrium-90 is used in radiation therapy to treat liver cancer and some other cancers.

Subramanian said that yttrium was easier to work with and less expensive than many other elements. For example, researchers are using yttrium instead of the much more expensive platinum to develop fuel cells. Scientists at Chalmers University of Technology and Technical University of Denmark are using yttrium and other rare earth metals in nanoparticle form, which may one day eliminate the need for fossil fuels and advance the efficiency of battery-powered cars.

Subramanian is working with paint and plastics companies to develop more uses of YinMn blue. The potential uses are due in large part to yttrium's unique properties. "It's a lighter-weight element, so you can have more volume without adding weight," he said. "That's very helpful for paint. Yttrium is an amazing element."