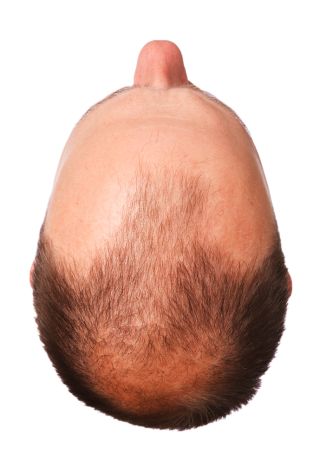 Male pattern baldness follows from a one-two punch of genetic influence (probably related to more than one gene, and not necessarily from the maternal side) and hormonal changes in adulthood. Baldness in men is related to the male hormone dihydrotestosterone, which causes old hairs on the scalp to be replaced by progressively shorter and thinner hairs in a predictable pattern, beginning at the temples and crown of the head.

A study in 2011 found that the root cause of male pattern baldness is that as we age, stem cells in the scalp lose the ability to develop into the type of cells that make hair follicles.

While many treatments for baldness are not proven to work, there are some things you can do to prevent hair loss:

Both Rogaine and Propecia both claim to prevent hair loss. Hair transplants are also popular. Or you can go with the flow: both men and women naturally lose hair as they age. And it’s not necessarily a bad thing.

The fact that one can be genetically predisposed to baldness suggests that hair loss has (or had) some evolutionary advantage. Since mates are selected for genetic worth, a physical trait that boasts of some genetic edge is more likely to spread throughout a species. A shiny pate may indicate a man's advanced stage of physical and social maturity. This could encourage increased status in a social group as well as less aggressive behavior from other males, as the bald man is visibly past the threatening stage of high sexual activity, and perhaps more likely to be a nurturer to younger groups as well. This could be a selling point to women looking to mate.