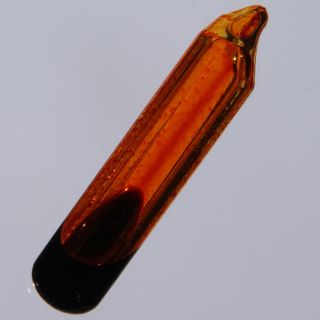 Pure liquid bromine in a 1-by-4 centimeter vial.
(Image: © Images of Elements)

Smelly element No. 35, bromine, is a fairly abundant element but has a rare property: it is the only nonmetal to exist in liquid form at room temperature, and one of only two elements (the other being mercury) that is liquid at room temperature and pressure.

It is the 44th most common element in Earth's crust, according to Periodic Table with an abundance of 2.4 parts per million by weight, according to Chemicool. Bromine occurs in compounds present in sea water, natural brines and salt-lake evaporates. Bromine mineral deposits in the United States are in natural brine wells in Michigan and Arkansas. Worldwide production estimated to be around 330,000 tons per year. It is also recovered in Israel, Russia, France and Japan, according to Minerals Education Coalition.

Bromine is very harmful to the atmosphere. According to Chemicool, bromine atoms are 40 to 100 times more destructive in the ozone layer than chlorine atoms. Up to half of the loss of ozone above Antarctica is due to reactions involving bromine. Methyl bromide, used as a fumigant, is the largest source of ozone-depleting bromine. About 30% of the bromine in the atmosphere comes from human activities, the rest is natural.

Carl Löwig, a German chemistry student studying under German chemist Leopold Gmelin, isolated liquid bromine in 1825 by taking a sample of water from a salt spring in Bad Kreuznach and adding chlorine, according to Chemicool. After shaking the solution with ether, Löwig discovered a red-brown substance in the solution and isolated it by evaporating the ether. Gmelin advised that his student produce more of the substance so that it could be studied in further detail. By the time Löwig had produced more of the substance, after having been slowed between winter exams and holidays, another scientists had already published his findings.

That scientist, Antoine-Jérôme Balard, a French chemist, isolated bromine when studying a brown seaweed known as fucus, according to Peter van der Krogt. Balard took a sample of the brine in which the seaweed was found and distilled the mixture of brine with chlorine to produce a dark red liquid, according to Chemicool. He originally thought that it was either a chlorine or iodine compound, and when he could not isolate either element, he proposed that he had in fact found a new element. Balard suggested the name muride, from the Latin word "muria" or brine, for his new element. His results were published in 1826.

One area of research in which bromine is studied is how bromine affects the atmosphere. A resource published by the National Oceanic and Atmospheric Administration (NOAA) describes how bromine, as well as chlorine, destroys ozone molecules during three reaction cycles. In the first cycle, reactions between chlorine or chlorine monoxide interacting with ozone leads to monotonic (O) or diatomic oxygen (O2). The second cycle also reacts chlorine with ozone to result in diatomic oxygen. The third cycle shows bromine reacting with ozone to also result in diatomic oxygen. In all of these cases, sunlight is needed for the reactions so ozone depletion is greater during the summer months and greatly slows down or ceases in the winter months when there is minimal to no sunlight reaching the poles.

There are several studies, including one study published in 2017 in the journal Atmospheric Chemistry and Physics by Bodo Werner, et al., a group of scientists from Germany, the United States, and the United Kingdom. The study used a variety of methods to calculate the amount of bromine present in the atmosphere. The study suggested that approximately one third of ozone depletion is due to bromine. According to the study, the bromine compounds in the atmosphere have four major sources:

Since the peak in 2000 with bromine levels approximately 20 parts per million, the levels of bromine in the atmosphere have been decreasing at a rate of 0.6 percent per year. Several resources were used in the authors' calculations and were focused in tropical and subtropical regions.

The NOAA also reported in late 2016 that levels of bromine and other ozone-depleting gases are decreasing in the atmosphere. The study looked at the atmosphere over Antarctica and the mid-latitudes and combined current values with observations dating back to the 1970s and projected values out through 2080. Using 1980 values as a benchmark, the researches forecast that ozone depleting gases primarily containing bromine and chlorine, will reduce to 1980 levels between 2040 and 2050 in the mid-latitudes and around 2070 over Antarctica. Decreased levels of these gases in the atmosphere are a part of ongoing efforts in slow climate change and to promote regeneration of the protective ozone layer.