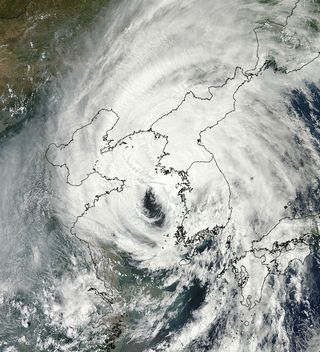 Parts of East Asia are facing yet another bruising tropical cyclone this week, as Tropical Storm Bolaven slams into North Korea, South Korea and China.

The storm made landfall yesterday (Aug. 28), and satellites have been tracking its progress.

The storm had weakened slightly since the previous day; on Aug. 27, a NASA satellite saw then-typhoon Bolaven blasting the Korean peninsula with drenching rains. At one point, the storm was dropping about 3 inches (8 centimeters) of rain per hour.

A NASA satellite image snapped several hours earlier showed the storm centered over the Yellow Sea. The center of Bolaven's circulation was cloud-free and appeared very large on satellite imagery.