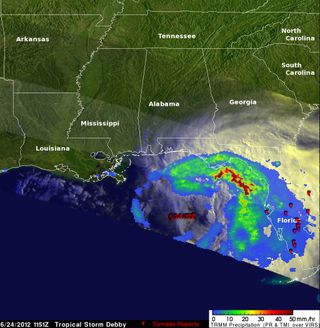 Tropical Storm Debby has hammered Florida and southern Georgia, dropping as much as 2 inches (50 millimeters) of rain per hour, according to measurements made by a NASA satellite.

The Tropical Rainfall Measuring Mission (TRMM) satellite is essentially a flying rain gauge that can calculate total rainfall, including the heavy downpours from Debby, from space.

Measurements from the satellite show 7 inches of rain fell on Gainesville, Fla.,  Sunday (June 24), making that day the second-rainiest in the city's history.

Other areas in north Florida have seen more than 15 inches of rain in the past few days, and some areas may accumulate 2 feet (61 centimeters) of rain before slow-moving Debby has passed through. Nearly 20 inches (51 cm) of rain has fallen in two days on Florida's Wakulla County, according to the news service Reuters. Roads were flooded in many parts of the area, where the Florida Panhandle meets the peninsula.

Debby could bring 4 to 8 more inches (10 to 20 cm) of rain and could possibly form more tornadoes in north Florida and southeast Georgia in the next couple of days, according to the National Hurricane Center.

Debby, the fourth-named storm for the Atlantic basin this season, arrived sooner than any previous No. 4 storm on record. But despite the busy start to the 2012 hurricane season, forecasters are still calling for a "near-normal" season.