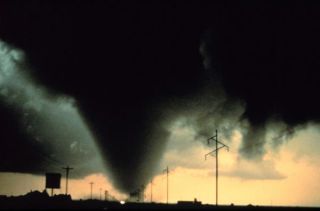 Twister central: The United States is the site of about 85 percent of the world's tornadoes.
(Image: © NOAA.)

The number of tornadoes is way down this year, compared to last year as of May 6.

The trend of tornado reports for the season to date is nearing the recent 12-year average, despite a rapid start.

Unusual warmth during the late winter and early spring, including warm Gulf of Mexico waters, likely contributed to a high number of early-season tornadoes. A strong jet stream left over from the La Nina pattern also played a role.

According to Expert Senior Meteorologist Dan Kottlowski, "With a lack of cold air in the Deep South this winter, Gulf of Mexico waters remained unusually warm."

A persistent southerly flow frequently drew warm, moist air from the Gulf, and combined with the strong jet stream; both necessary ingredients for violent thunderstorms and tornadoes.

Kottlowski also pointed out that the ground was much warmer than usual over the central part of the nation.

More recently, a diminishing La Nina pattern has allowed the corridor of tornado-producing thunderstorms to shift farther west, when compared to last year.

The jet stream pattern in recent weeks has weakened substantially and faster than usual than what we usually see in the spring.

According to Severe Weather Expert Henry Margusity, "This April, severe weather-shocked Alabama has not had a single tornado. Last April, Alabama was slammed with swarms of tornadoes."

The pattern during the first week of May looked more like a June pattern, with weaker weather systems, despite some unusual chill in the Northeast.

As of May 6, 2012, according to NOAA's Storm Prediction Center, the national count of tornado reports stands at 656, which is only a couple dozen or so above the average for the date.

Over the balance of the year you tend to gather a few tornadoes here and there.

During the summer, while necessary surface heating is present, the jet stream is typically rather weak. In the fall, while the jet stream strengthens, heat needed to generate violent storms is decreasing.

Exceptions to this rule include some tropical storms and hurricanes during the late summer and early fall.

A high pressure ridge has kept severe weather to a minimum over the Southeast this spring (essentially limited the outbreak of early March), but that could change. Conditions in the atmosphere, no matter how persistent the pattern may be, is always fluctuating.

"We do have a dip in the jet stream diving into the South this week and we do expect some severe weather in the region as a result," Kottlowski said.

"However, in order for severe tornado outbreaks like which occurred in Alabama last spring, everything needs to be perfect in the atmosphere." Kottlowski added.

Despite quiet weather in the Southeast during April, people should not let their guard down.