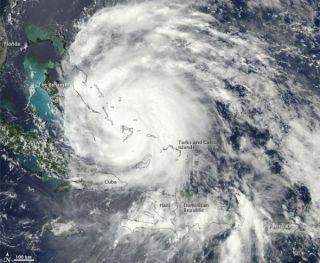 NASA satellite data shows that the diameter of Hurricane Irene is now about one-third the length of the U.S. Atlantic coastline.

The GOES-13 satellite saw Hurricane Irene moving through the Bahamas on August 25, 2011 at 10:02 a.m. EDT and images from the satellite showed that the storm had grown to one-third the size of the East Coast.

NASA satellites are flying above Hurricane Irene, providing forecasters at NHC with temperature, pressure, wind, and cloud and sea surface temperature data. All of those things are critical in helping forecasters determine how Irene will behave and track. [New York Express? Hurricane Threat Based on History ]

Irene's minimum central pressure has fallen from 954 to 951 millibars since the day before, indicating the storm is still intensifying despite the slight temporary drop in maximum sustained winds.