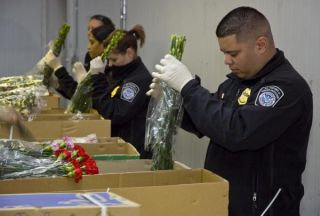 As Valentine's Day approaches every year, U.S. Customs and Border Protection agents get a lot of flowers.

Unfortunately, the bouquets intended to impress someone's sweetheart sometimes carry more than pretty petals. So-called invasive species and plant diseases from other parts of the world often come along too.

The customs agents must identify these undesirables and keep them from entering the country. If allowed to pass, they could wreck farms and ecosystems, and cost millions of dollars to eliminate. And as long the flowers keep coming, these critters will keep doing what they've evolved to do , said biologist Matthew Chew, of Arizona State University in Tempe.

"There is no point in blaming the beetles. The problem lies in how we handle, package, store and ship things, not in the biota," Chew told OurAmazingPlanet.

That's why customs agents are extra vigilant. During the 2010 Valentine's season (which lasts from Jan. 1 through Feb. 14) customs agents saw 320.8 million cut flower stems, up from 148.5 million stems processed during the 2009 season, according to customs records.

The closest port of entry to South America Miami is the preferred import destination for shipments of cut flower imports. Miami processed about 272 million stems, or 85 percent of the nations imported cut flowers last year.

Chances are, you should expect your Valentine to give you roses, a mixed bouquet or dianthus. Those were the top imported flowers in 2010. Pom-pom chrysanthemums, miniature dianthus, rose bouquets, alstroemerias, chrysanthemums, hydrangeas and gerberas round out the top 10 imported cut flowers.

By inspecting these flower imports, thousands of unwanted critters are intercepted. Thrips are one common pest spotted on flower imports. These small winged insects feed on flowers and vegetables and are known to carry more than 20 plant-infecting viruses. Aphids are another insect that is not allowed to enter the country. They are best known for playing a role in the Irish potato famine of the 1840s. Moths and miner flies are also commonly intercepted.

There's no way to tell how many pests were missed, and there's always some risk of accidental introduction as long as the flower trade stays strong.

So it's up to the customs agents to prevent anything unwanted from entering the country. After all, you can't fault these creatures for doing what they do best .

"The species we call invasive are actually just the ones that our regular activities have most often transported to environments where they can thrive by being absolutely normal, not by becoming monsters," Chew said.