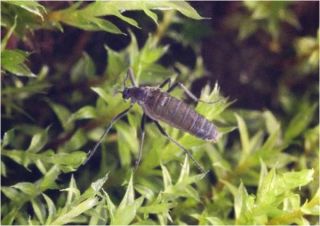 An adult midge found on Signy Island off Antarctica, where it is out-competing some native insect species.
(Image: © P. Bucktrout, British Antarctic Survey)

A tiny fly not native to Antarctica has proven it can not only withstand the icy polar climate, but thrive within it. This insect invader is just one of many foreign species that have reached several islands around Antarctica, with possible consequences for the native flora and fauna.

Scientists with the British Antarctic Survey (BAS) have discovered that a species of fly originally from South Georgia, the chironomid midge, has flourished since its accidental introduction to Signy Island in the Antarctic in the 1960s. It has expanded to more than 650 feet (200 meters) away from its original site, and in some areas is more numerous than any of the native insects.

"There's a risk of the flies becoming persistent and then turning into something invasive and damaging," said Peter Convey, a terrestrial ecologist with the BAS, who, along with study author Kevin Hughes, environmental research and monitoring manager at the BAS, presented research on invasive species in Antarctica at the International Polar Year science conference in Oslo last week.

The fly likely traveled unnoticed on the backs of plants that were brought to Antarctica for research purposes, Convey said. It was discovered in the 1980s, but didn't seem to be causing any harm. Then in the 1990s and early 2000s, its populations exploded, Convey said.

"There's been a lot more recognition that alien species are a threat to ecosystems and more likely to become established," he told OurAmazingPlanet.

The flies are decomposers, breaking down waste and recycling it back into the soil. While their function is actually beneficial, Convey said that the fact that they've become so numerous could be problematic. At their densest — over 400,000 larvae per square meter (about 11 square feet) — the flies make up more biomass than all other arthropods. Convey and his team are now studying the effects the fly is having on the rest of the ecosystem.

This study and other recent research on invasive species in the Antarctic should serve as a warning, said Yves Frenot, director of the French Polar Institute.

"Due to significant climate change and an increase in the number of visitors [to Antarctica], the risk of introduction and establishment of non-native species is extremely high," he told OurAmazingPlanet.

Already, there are around 200 non-native species on the sub-Antarctic islands including mice, rats, sheep, cats, beetles and aphids. Ground beetles in particular have been extremely invasive, preying on the native insects.

"On the islands where you see them, you get very big drops, sometimes extinctions, of local insects," Convey said.