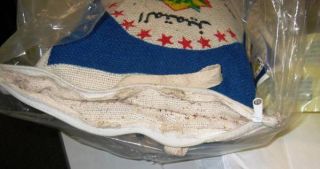 This bag of rice was seized at LAX because of its destructive stowaways.
(Image: © CPB.)

Customs agents intercepted a bag of rice last week that contained a dangerous stowaway one of the most harmful invasive species in the world.

A bug known as the khapra beetle, a native of India, was discovered by customs agents at Los Angeles International Airport (LAX). They found the bugs eight in total in a bag of Indian rice that arrived at the airport on a Dec. 29 flight from Saudi Arabia. Taking no chances, agents destroyed the bag because if the bugs were to get loose, it could launch an invasion that is one of the most difficult to stop . [Related: In Images: Alien Invaders: Destructive Invasive Species .]

The beetle's battle plan is threefold: Be small, reproduce quickly, and if things aren't going your way, dig in and wait it out.

"They're good at hiding and they multiply," Naveeda Mirza, the inspection agency's agriculture program manager, told the Los Angeles Times. "Before you know it, half of your grain is gone."

The beetles are good at hiding in cracks and crevasses because they're tiny. The oval adult males are up to one-tenth of an inch long (3.0 mm) and half as wide. Males are brownish-black with reddish-brown markings. Females are a tad larger and brighter. Both adults are covered in hair and feast on grains and seeds.

By squeezing into tiny holes, Khapra beetles can dodge insecticide sprays. In fact, since their reproductive cycle is short, improper spraying has led to a resistance in the beetles. Expensive and extended fumigation is required to wipe out an infestation.

Just as vexing is that even if an infestation appears to have been snuffed, the bugs may still be hanging around. That's because the beetles may have gone into a kind of hibernation mode, called diapause, where they wait out bad conditions in their environment. No food? Diapause. Too cold? Diapause. A pre-winter invasion in a cold environment may go unnoticed until the spring.

"Then you have people saying, 'Where the hell did that come from?' Well it came in last fall," said Thomas Fasulo, an entomologist at the University of Florida in Gainesville.

That's one of the reasons why customs agents keep a close watch on what's coming into the United States. In 2009, agriculture specialists seized more than 1.5 million prohibited meat, plant materials or animal products, including 166,727 agricultural pests at ports of entry, according to the U.S. Customs and Border Patrol.

"In populations like this, if you're not on top of them, you'll lose control," Fasulo told OurAmazingPlanet.