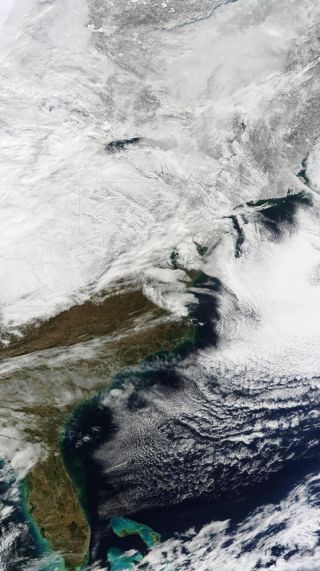 Heavy snows and rare thundersnow struck the Mid-Atlantic and Northeastern United States on Jan. 26 and 27.

January 2011 is already the snowiest January on record, with 36 inches (91.4 cm), according to the National Weather Service. February 2010 is the snowiest month of all time for New York City, with 36.9 inches of snow.

Oddly, this storm did not bring much cold weather with it. The previous week, a real arctic blast hit the East Coast. In Saranac Lake, N.Y., the low temperature for the day was minus 36 degrees Fahrenheit (minus 38 degrees Celsius). With the wind chill, outside it felt like minus 50 F (minus 45 C) in some towns. [Related: The Coldest Places on Earth .]

Thundersnow was heard rumbling in several places along the East Coast on Jan. 26, including Washington, Philadelphia and New York.

Thundersnow is a rarity, a wintertime thunderstorm with snow instead of rain. These storms spawn long, low rumbles of thunder, sometimes with lightning flashes. The lightning can stretch out in long creepy-crawly branches moving over tens of miles, similar to the lightning in squall line storms during Midwestern summers.

Thundersnow is caused by an upward rush of air from the ground to high in the atmosphere, paired with temperatures at or below freezing. This cold air keeps the snow from melting into rain. Snow can fall at intense rates during such a storm. In New York City, snowfall was reported at 3 inches (8 cm) per hour at times yesterday. [Related: What's a Blizzard?]

The Jan. 26 storm came almost one month after the Christmas Blizzard of 2010 . That storm dumped 20 inches (50.8 cm) of snow on New York City's Central Park.