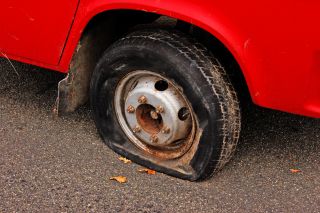 It's possible, under some circumstances, to drive on a flat tire.
(Image: © Kenneth William Caleno | Shutterstock.com)

For tire safety tips, you might do better than to ask Joshua Nadelhoffer, 29, of Jupiter, Fla.

Nadelhoffer was arrested Wednesday (May 8) after leading police on a high-speed chase in a stolen car with four flat tires, the South Florida Sun-Sentinel reports.

The tires on the car — a red Camaro, predictably enough — were punctured by a tire spike strip when Nadelhoffer rammed his way through a security gate at a Hertz Rent-A-Car parking lot in Fort Lauderdale.

Though he was eventually arrested after the Camaro spun out of control on Interstate 95, Nadelhoffer's stunt raises the question: How far can you drive on a flat tire (let alone four)? [Top 10 Teched-Out Cars for 2013]

A flat tire doesn't always announce itself with a loud noise or other obvious signs: Sometimes, the flat is the result of a slow leak that causes the tire to gradually lose air pressure.

When you realize a tire is flat while driving, remain calm but take action immediately. Slow down and pull off the roadway into a safe area away from traffic, the National Safety Council advises.

There are times, however, when the nearest safe area is the next exit ramp, or some other distant location.

Fortunately, it's possible to "drive several hundred yards before you irreparably destroy the tire," according to Car Talk.

It might therefore be smarter to drive slowly (not more than 20 mph, or 32 km/h) to a safe stopping point, rather than to stop on a busy highway.

The National Safety Council advises, "It is better to roll the car off the roadway … and into a safe place than it is to stop in traffic and risk a rear-end or side collision from other vehicles."

Saving the flat tire so that it can be repaired is one consideration; another is saving the metal wheel on which the tire is mounted.

The flat tire "acts as a cushion," according to Car Talk, protecting the rim of the wheel. You can therefore drive — again, at a slow speed — for hundreds of yards before your wheel is damaged, "though your tire may no longer be any good."

All this car care and safety information would probably be lost on Nadelhoffer — but because his arrest for grand theft auto is his fifth arrest in four months, he'll probably be parked in jail for a while.