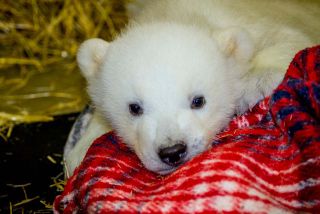 The 3-to-4-month-old male cub was rescued two weeks ago by hunters who say they unwittingly shot the bear's mother near Point Lay, Alaska, according to the Anchorage Daily News.

The bear has been called Kali (the Inupiat name for Point Lay) and is being cared for at the Alaska Zoo in Anchorage but will be sent to the Buffalo Zoo later this spring, the U.S. Fish and Wildlife Service announced last week.

In Buffalo, Kali (pronounced "Cully") will be raised alongside a 4-month-old female polar bear cub nicknamed Luna, whose mom Anana was having trouble taking care of her. Letting the two cubs interact and play together could help ensure that they don't get too attached to their human keepers.

"At the Buffalo Zoo, both cubs would benefit from each other's company during this important period in their development," Randi Meyerson, coordinator of the Polar Bear Species Survival Plan, said in a statement. "Peer-raising animals is generally preferred over human-rearing whenever possible."

Buffalo might only be a temporary home for Kali; officials are considering the Saint Louis Zoo as a final destination for the bear.

"We recognize that the Saint Louis Zoo is in the process of building a state-of-the-art polar bear exhibit expected to be completed in 2015," Dan Ashe, director of the Fish and Wildlife Service, said in a statement. "Our goal is to work with the Zoo to ensure the proper standards of care are met for the polar bears who will eventually find a home in Saint Louis."

The polar bear is the largest species of bear on the planet. An adult male weighs between 775 and 1,200 pounds (351 and 544 kilograms) and will reach its full adult size between the ages of 8 and 14 years. Adult females are half the size of their male counterparts — 330 to 650 pounds (50 to 295 kg) — and reach full size at around age 5 to 6 years. Polar bears in captivity typically live into their 30s.

In the wild, polar bears are found in Russia, Alaska, Canada, Greenland and Norway's Svalbard archipelago, and the animals are threatened by declining Arctic sea ice, oil development, pollutants and hunting. In May 2008, United States listed the polar bear as a threatened species under the Endangered Species Act, while in Canada and Russia they are listed as a species of special concern.