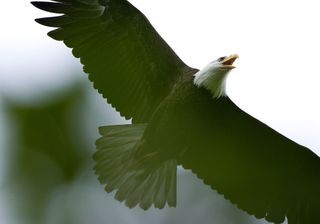 Bald eagles soar at an altitude of 10,000 feet (3,048 meters), reaching speeds of about 30 to 35 miles per hour. They are also very good swimmers, which comes in handy when they are hunting for fish. Keeping with its status as the U.S. national emblem, the bald eagle can be found in every state except Hawaii.
(Image: © Steve Hillebrand | U.S. Fish and Wildlife Service)

SACRAMENTO, Calif. — Two long-time political rivals lowered their defenses recently and spoke of reaching an accord on the Endangered Species Act, the law that led to their fiercest battle four decades ago.

This year marks the 40th anniversary of the act, co-signed in 1973 by Rep. Pete McCloskey (R-Calif.). McCloskey, always an environmentalist, left office in 1982 but returned to campaigning to unseat seven-term incumbent Richard Pombo in 2006. Pombo (R-Calif.) had earned an anti-environmental reputation for his attempts to reform the Endangered Species Act, and McCloskey sent enough votes to Pombo's Democratic rival to decide the election against Pombo. Neither has been elected to office since 2006.

At a panel discussion on the Endangered Species Act and its future, held Jan. 31 at the Western Section of The Wildlife Society's annual meeting in Sacramento, the two men discussed how the needs of small property owners — ranchers like themselves — should be addressed to preserve the law for the future. Their comments, edited for length, follow.

Pete McCloskey: As a small farmer, like Richard, I think I'd like to see this provision added to the act. If the property substantially diminishes in value, I would invoke the Fifth Amendment condemnation clause; entitled to just compensation. I want to take that small landowner out of the opposition to this act. In some way I think that person is entitled to compensation.

Richard Pombo: If you really want to come down to fixing what's wrong with the law you've got to deal with those property owners. You've got to figure out a way for the small guy, the small farmer, the small developer, the small property owner, to participate in this process. To me, that's the bottom line in all of it, because if you can't figure out a way to do that, then, ultimately, the law is destined to collapse, because you will eventually generate so many people that oppose it that political pressure will be there to do something different.

On why efforts to reform the act have failed in Congress:

R.P.: In 1995 and 1996, we developed legislation as a way to reform the law to address those issues that we were concerned about. In retrospect, 17 years later, I can tell you I'm glad that didn't become law, because that wouldn't have worked.

And contrary to what many of you may think, or what you've heard, or what the press reports were, or what you read on the Internet or somewhere else, [in 2005] we actually had a bill that was about 95 percent agreed to by both sides of the aisle, by environmental groups, by the developers and property rights guys and everybody else.

In fact, we passed it overwhelmingly on the House floor, but one guy who was the ranking Democrat on the resources committee had a substitute bill and that substitute was my bill with the exception of they took out the property rights language.

On funding the U.S. Fish and Wildlife Service, which implements the law:

P.M.: The future of the act is very much in doubt because we're at a time when the expenditure of any monies in government is under challenge, and they're not going to cut the defense budget, and they're not going to cut other budgets, but they're sure as hell going to cut the budget of the Fish and Wildlife Service and agencies like it. If we want to preserve the act, we've got to provide some way to have revenues come into the agencies. I'm thinking of the land and water conservation fund, Richard, which we created to save habitat.

If the fees for granting a permit for a [habitat] take are funneled into the land and water conservation fund, that might keep this agency alive, despite the fact that it cannot expect its budget to be increased in future years. I'd like to devise a means where the permits for the take go back to this agency. [In Photos: Endangered and Threatened Wildlife]

R.P: Most people don't realize that the ESA actually expired [in 1993] and is no longer in effect by statute. What is in effect is the courts have decided by appropriating funds for the ESA that's what has kept it alive. You could starve it and take all the money away from it and it would die, and that's true. If you didn't appropriate money for the ESA, it would go away, because it's a de facto reauthorization every year when Congress appropriates money to keep it going.

P.M.: You can kill the act by cutting off the money for the U.S. Fish & Wildlife Service to do its job. You can ruin the Fish and Wildlife Service if you put a lot of burdensome lawsuits and other things on it. And you can kill it if it doesn't have the money to do the job that Congress has entrusted it with, and of course, for the last 12 years, it hasn't had the money. That money has essentially gone down.

On how the law was passed:

P.M.: [In] 1970, Congress was overwhelmingly pro-development. Environmentalists were considered as little old ladies in tennis shoes or crazy kids against the war and there was no environmental group in 1970.

[Then] Earth Day was celebrated all over the United States on nearly every campus.

I was friends with John Ehrlichman at that time, who was an environmental lawyer, incidentally, before he went to jail for Watergate. And he called me after Earth Day — he was laughing as hard as I'd ever heard, and he said, "Pete, I've got this report from J. Edgar Hoover to deliver to the President [Nixon] tomorrow," because the President was so paranoid that Earth Day was going to be a bunch of anti-war kids gathered that he had put them under surveillance by the FBI.

Well, Earth Day came and went and everybody forgot about it, then one day the Washington Star, an afternoon paper, reported on page six, "Youth group declares 12 members of the House of Representatives a dirty dozen and vows their defeat."

Well, I'm in the cloak room, on the Republican side, there's six couches where the elderly recline between votes, and I'm in there at 2 o'clock, and this guy runs in waving this paper, "This is your work, McCloskey, godammit, this is your work." He's one of the dirty dozen. Well, this wakes up the six elderly men sleeping on the couches. There's a little discussion about it, and they say, aw, lay off Pete, it's just a bunch of kids, ho, ho, ho, a lot of kids, who worries about kids, they never participate.

There were two Democrats on that list and 10 Republicans. And a little later everybody opened their Washington Post as they do every morning and the two Democrats had both been defeated by less than 1,000 votes because the kids of Earth Day had descended on Baltimore, Md., and had taken out the chairman of the House public works committee. They had taken out a guy who had been 30 years in the House. Well, within 24 hours seven of the 10 Republicans had come to me and said, "Pete, what's this about air pollution you talk about every once in awhile."

Five of those Republicans were defeated in November. When the Congress convened in January 1971, everybody was now an environmentalist. Nobody had seen seven incumbents taken out by a bunch of kids before, because those kids had descended in the thousands. They hadn't picked the 12 worst. They had picked in areas where they thought they could win.

In January 1971, when Congress convened, look at the record: Clean water, endangered species, marine mammals protection, estuarine protection. It was the golden era of the landmark laws of the environmentals, and it ushered in a period of 24 years of bipartisan cooperation.

R.P.: The Endangered Species Act was a creation of Congress, and then it abdicated any responsibility so they could blame Fish and Wildlife for what happened. That's basically what we've watched over the last 40 years. Congress created it, told Fish and Wildlife and NOAA (National Oceanic and Atmospheric Administration) to go out and solve this problem and protect species, but don't list a species in my district or don't list a species that affects my state or my industry, and if you do I'm going to come down on you. That's not up to Fish & Wildlife to make those decisions, and yet, we expect them to do that. This is one of those reforms. It's Congress' job to make the political decisions. It's not up to the Fish and Wildlife Service to make political decisions. if it's endangered, it should be on the list, and that's it. What we do about it is a political decision. [In Images: 100 Most Threatened Species]

On the future of the Endangered Species Act:

P.M.: The last time young people really got involved like [Earth Day] was in Obama's election. I hadn't seen that since 1970, and it made all the difference.

The future of the Endangered Species Act are amendments that get rid of its problems, an administration which furnishes enough money so it can do its job, but most of all, it's going to rest on you people, and whether you engage in the political process or not.