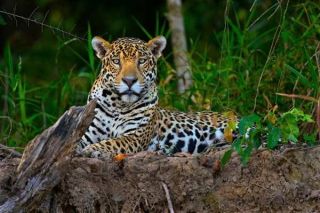 A jaguar in the Pantanal part of Brazil.
(Image: © Steven Winter, Panthera)

The U.S. Fish and Wildlife Service (FWS) was slated to announce the establishment of a new protected area for jaguars in the American Southwest in early 2011, but now that decision will be put off for another year, the FWS recently announced.

The FWS pledged to set up the protected area in response to a lawsuit from two conservation groups that champion the cause of endangered species, the Center for Biological Diversity (CBD) and Defenders of Wildlife, Scientific American reported.

Jaguars are endangered and possibly locally extinct in the United States since March of 2009, when the last known U.S. jaguar was caught in a trap meant for bears and cougars in Arizona. The jaguar was later euthanized.

The CBD is recommending that about 83,000 square miles (214,969 sq km) in Arizona and New Mexico be set aside as a "critical habitat" for jaguars , a designation which would prohibit any federal-level permits for altering the landscape in a way that would prove inhospitable for the big cats . Development within the protected area could continue, but large-scale changes, such as draining a wetland, would be prohibited.

The CBD's Michael Robinson told Scientific American that the FWS's announcement amounts to "an unfortunate delay that the jaguar can ill afford."

However, the FWS Arizona Ecological Services Field Office field supervisor Steve Spangle says the CBD-recommended protected area is "larger than any other critical habitat that I'm aware of."

Even within the conservation community, the issue of the new jaguar habitat is not without controversy. In a January op-ed in The New York Times shortly after the FWS first announced its plans to designate an area for the jaguars, Alan Rabinowitz, head of the big cat conservation group Panthera, said the plan ignored scientific assessments of the species' needs.

"The American Southwest is, at best, marginal habitat for the animals," he wrote, noting that conservation efforts should focus on the jaguar's more established habitats in Latin America , where his group works.

However the issue of the jaguar habitat is resolved, it will have implications for the way officials interpret the Endangered Species Act in the future. The law requires the government to set up protected areas for animals facing extinction, but it does allow wiggle room if the establishment of a protected area might hinder economic development.

The FWS is putting together a special team of experts from the United States and Mexico to further study jaguar populations and habitats. "We believe it's better to do it right than do it fast," Spangle told Scientific American.