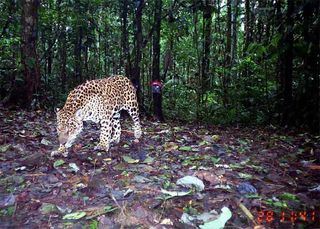 A camera trap in Ecuador recently captured an image of this jaguar.
(Image: © Santiago Espinosa.)

Brazilian ranchers troubled by the tendency of jaguars to stealthily kill cattle may be justified in their fears, according to new research on the mysterious cats' hunting patterns.

Jaguars in the Pantanal wetlands of central Brazil hunt native species, such as giant anteaters, more often than cows, scientists discovered. But when they do kill cattle, they do so at rates exceeding rancher estimates.

The results stand in sharp contrast to government and nonprofit groups' beliefs in the over-exaggeration of cattle rancher losses, in a region where 95 percent of the ranches are privately owned and have been around for more than 200 years, the researchers say.

Documenting hunting and feeding of jaguars "is extremely difficult because of their nocturnal and secretive behavior," the study scientists wrote in the June issue of the Journal of Mammalogy.

Objective, unbiased data was only possible through technology similar to that now used to track cougars, wolves and coyotes in North America.

Ten jaguars outfitted with collars that sent GPS signals of their whereabouts every two hours, produced a volume of data on their hunting paths and areas of concentrated use such as kill sites, dens and bed sites in the Pantanel – the world's largest freshwater wetland. Every 21 days of data collection, a team of researchers visited a few of these areas in order to identify prey remains.

A total of 11,787 GPS locations collected from October 2001 to April 2004 resulted in 1,105 areas of high jaguar use. Prey remains were found and logged at more than 400 kill sites. Just over a third of the animals killed by jaguars were cattle, while the remaining 68 percent were native species, including caiman (a crocodilian), peccaries (piglike mammals), wild hogs, marsh deer and giant anteaters.

While a recent survey suggested ranchers estimated losing about 70 head of cattle annually out of 6,000 head, the study's results for kill rates showed that during a dry year they usually lost about 390 head, and during a wet year, around 118 head.

A major jaguar stronghold outside of the Amazonian rainforest, the Pantanal wetlands cover an area the size of Iowa frequently flooded in about 3 to 7 feet (1 to 2 meters) of water from rainfall.

"There are times literally in the field when you're on horseback and the water is up to the horse's belly," researcher Eric Gese at Utah State University told Livescience.

The jaguars "don’t mind the water at all," Gese said, but the study revealed the carnivores' hunting choices are largely influenced by seasonal rainfall and water levels, as the ebb and flow of water determines their access to certain animals.

During the wet season, when cattle are scarce and cloistered among elevated plateaus, jaguars predominantly killed the numerous alligators in the area. In the dry season the pattern reversed and cattle killing peaked, as ranchers moved their cattle to the lower grounds to utilize the lush grasses exposed in the formerly flooded plains.

"As they spread the cattle out, they're just exposed to more jaguars. And the jaguars, being the large carnivore as they are, take advantage of the availability of the animals," Gese said.

Other results of the landmark study, which also collected data on spatial ecology and some interactions, including the insight that jaguars were densely populated, with about 10 to 11 cats per 100 square kilometers (39 square miles) in the area studied, and "surprisingly social."

"We found that they actually encounter each other and spend more time together than we ever anticipated. That was a surprise. Not like prides of jaguars, nothing like that: we had males travelling together, and we didn't know if they were brothers," Gese said. "And the density of jaguars recorded in that area was greater than anything we encountered … that was astounding."

"It was quite mind-blowing. So, there are a lot of cats there," Gese added.

Recognizing that the ranchers have "a real problem," yet the region's livestock supports jaguars, Gese said his team of scientists was trying to work with officials to get them to figure out a compromise and accept some form of coexistence.

"How they deal with that is up to them. How they want to enact that. This is the first time that somebody has said, 'Look there's data! They lose a lot of cattle to jaguars,'" Gese said.