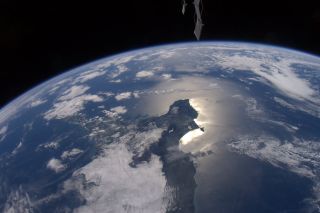 This photo of Earth from the International Space Station was taken by NASA astronaut Ron Garan, who has been blogging about the planet's beauty on his website Fragile Oasis. This image, taken on April 15, 2011, was Garan's first photo sent via Twitter.
(Image: © NASA via Ron Garan/Astro_Ron)

Earth Day turns 41 this year, but in some ways, environmentalism seems to be stumbling. According to recent Gallup polls, 48 percent of Americans now believe that the dangers of climate change are exaggerated, up from 41 percent in 2009 and 31 percent in 1997. Meanwhile, environmental concerns rank eighth on Americans' worry list, behind terrorism, illegal immigration and the size and power of the federal government.

Getting people to care about environmental threats -- especially distant ones such as climate change -- can be tough, environmental advocates say. But whether or not people care about the environment may not matter much at all.

"Many people do things that would be considered environmentally sound, even if they aren't doing it for environmental reasons," said Edward Maibach, a professor of communication at George Mason University in Virginia who has studied Americans' opinions about climate change. "Several groups are concerned, one is not. But all of them place a high value on conserving energy." [Read: The Carbon Footprint of Sex & Other Daily Activities]

"It's tapping into a broadly held value," Maibach told LiveScience. "People just think it's a good idea to save energy and to save money as a result of saving energy."

Who cares about climate?

Maibach and his colleagues conducted a nationally representative survey of American adults in 2008 to understand how the public thinks about climate change.

But surprisingly, all of the groups conserved energy at the same rates, said Anthony Leiserowitz, the director of the Yale University Project on Climate Change, who was involved in the study with Maibach.

"The dismissive are conserving energy and saving energy as much as anyone else," Leiserowitz told LiveScience.

Part of the reason is that alarmed people are only beginning to translate their concern into action, Leiserowitz said. Another reason is that for too many people, conservation is a means to another end beside environmentalism. Some want to save money. Others see kicking foreign oil as a national security issue. Some Christian evangelicals believe protecting the Earth is a biblical mandate, Leiserowitz said.

"It's about thrift, conservation," Leiserowitz said. "These are core American values."

Can green be easy?

For that reason, convincing more people that climate change is happening may not be as productive as making it easier for people to be environmentalists -- even if they don't call themselves that.

Maibach, Leiserowitz and their colleagues asked Americans about what sort of actions they thought were important for conservation and what actions they were actually taking. They found that almost everyone thinks that carpooling, biking instead of driving, reducing trash and other behaviors are important. But there were many gaps between what people believed and what they actually did. About 72 percent of people said carpooling or taking public transportation were important activities, but only 12 percent said they did either (another 2 percent said it wasn't important, but they did it anyway).

In contrast, people tended to engage in easier activities. Ninety-five percent of people said turning off unneeded lights is important, and 90 percent reported doing so.

It all comes down to barriers that prevent people from taking environmental action, Leiserowitz said.

"I would love to be able to take a bullet train from Connecticut to California, but I can't because my society hasn't provided me with one, whereas Japan and China and Europe have," he said.

So does Earth Day matter? It can be helpful, Maibach said, at least if it causes people to think about year-round environmental strategies.

"Earth Day is important in the sense that different cancer awareness days are important," said Mia Yamaguchi, the CoolClimate Network outreach coordinator at UC Berkeley's Renewable and Appropriate Energy Laboratory. "Maybe the average American isn't involved in or organizing an event, but they may be more likely to read an article or donate."

Yamaguchi said she doesn't want to see more people worried about the environment -- she wants to see action.

"There are many, many things that any one person can do to manage their own environmental impacts, which I think makes it really different from worries like the national debt or U.S. foreign policy," Yamaguchi said. In those cases, "I can probably write a letter to a politician, maybe donate to a cause," she said. "But if I actually start looking at what it would take to improve my vehicle's fuel efficiency by 5 miles per gallon, that makes a big difference."

The CoolClimate Network has a variety of online widgets for people interested in calculating their own energy footprint. In the meantime, April 22 is a good day to step back and remember the planet we live on, Leisowitz said.