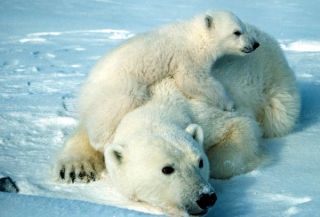 A polar bear and her healthy cub, a sight that could be increasingly rare in Canada's Hudson Bay.
(Image: © Scott Schliebe/USFWS)

Loss of Arctic sea ice is linked to a decrease in polar bear birth rates in Canada's Hudson Bay, according to new research. If the trend continues, the polar bears in the region could be facing a population crisis.

In fact, if climate change continues unabated, the researchers say, polar bear populations across the entire Arctic will be in serious trouble.

Researchers at the University of Alberta in Canada examined sea ice data from the 1990s on, and found that as temperatures increased and sea ice levels dropped, so did the number of newborn polar bear cubs .

Polar bear mothers retreat to a maternity den during pregnancy, never once emerging for food. An early spring ice breakup reduces the hunting season, and pregnant females aren't able to amass enough body fat to support them through their 8-month fast, when they must stay hidden in their dens to gestate their young and give birth.

Using mathematical modeling to estimate the impact of a shortened hunting season, the research team found that if ice in the Hudson Bay disappears one month earlier than in the 1990s, between 40 and 73 percent of pregnant female polar bears will not give birth to a surviving cub.

If the ice is gone a full two months earlier, between 55 and 100 percent of pregnant bears will not reproduce.

According to the most recent estimates, Hudson Bay is home to about 900 polar bears, down from 1,200 bears in the past decade.

Since the region's bear population is the world's most southerly, they are the first to be affected by global warming trends.

However, the researchers say that if temperatures across the Arctic continue to rise, much of the global population of polar bears will be at risk.

The research is detailed today (Feb. 8) in the journal Nature Communications.