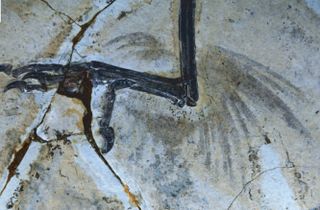 Chinese fossils reveal that ancient birds had feathers on their legs.
(Image: © Science/AAAS)

More than 100 million years ago, birds living in what is now China sported wings on their legs, a new study of fossils suggests.

Researchers found evidence of large leg feathers in 11 bird specimens from China's Shandong Tianyu Museum of Nature. The feathers suggest that early birds had four wings, which may have played a role in the evolution of flight, scientists report in a study published today (March 14) in the journal Science.

Most scientists believe that birds evolved from other feathered dinosaurs; this belief is supported by discoveries of fossils of feathery birdlike creatures. In 2000, scientists discovered a nonavian dinosaur with feathers on its arms and legs, called Microraptor, which could probably fly. In addition, specimens of Archaeopteryx, a transitional fossil between modern birds and feathered dinosaurs, show faint featherlike structures on their legs, but the signs are poorly preserved.

Now, leg feathers have been spotted in the 11 museum fossils that had been collected from the Lower Cretaceous Jehol formation in Liaoning, China, from a period about 150 million to 100 million years ago. The feathers are stiff and stick straight out from the birds' legs, and have a large enough surface area to be aerodynamic, the researchers say.

The fossils belong to at least four different groups, including the genera Sapeornis, Yanornis and Confuciusornis, as well as the Enantiornithes group. The findings suggest that leg feathers weren't just an evolutionary rarity.

The researchers also analyzed feathers of other birds and nonbird dinosaurs. Feathers covering the entire leg and feet first developed in dinosaurs, continued in early birds and later disappeared, the results imply. Birds gradually lost feathers on their feet and then their legs, and today, modern birds have wings on their arms only.[Avian Ancestors: Dinosaurs That Learned to Fly]

Whether these early birds used their leg feathers to fly, and how they may have done so, is up for debate. According to the study researchers, the flat surface formed by the stiff perpendicular feathers could have provided lift and maneuverability.

"These new fossils ﬁll in many gaps in our view of the early evolution of birds," animal flight expert David Alexander of the University of Kansas, Lawrence, who was not involved in the study, told Science magazine. Alexander agrees that the feathers probably had some aerodynamic function, "although whether as stabilizers, steering vanes, or full-blown wings remains to be seen."

Other scientists aren't convinced. Paleontologist Kevin Padian of the University of California, Berkeley, told Science magazine that the authors don't provide evidence that the feathers contributed to any sort of flight. In fact, the feathers would create drag that would hinder flight, Padian said. The birds may have used their plumes for courtship instead, another scientist suggested.

More studies are needed to nail down the feathers' function. Examining more fossils from the thousands in the museum collection will help, the study's authors say.