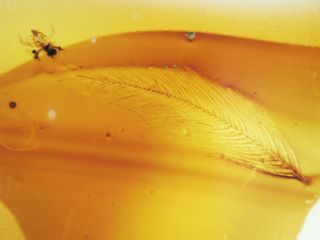 About 80 million years ago, the flap of wings in a conifer forest let loose feathers that floated through the air before sticking to globs of shining tree sap below.

Researchers in Western Canada have discovered these slicks of solidified sap, known as amber, contain a great variety of dinosaur and bird feathers from the Late Cretaceous period.

They found 11 sets of feathers after screening more than 4,000 amber deposits in different museum collections. The feathers were so well-preserved that the researchers were even able to guess at what colors they might have been. They also contained samples of each of the four stages of feather evolution. [See images of the preserved feathers]

"All the feathers are preserved down to micron scale, showing indentations and pigmentation," study researcher Ryan McKellar, of the University of Alberta, told LiveScience. "It’s also the first time we've found protofeathers [feathers thought to belong to nonavian dinosaurs] preserved in amber."

The study will be published tomorrow (Sept. 16) in the journal Science.

The researchers sanded down and polished the amber pieces to just millimeters away from the feathers. This allowed them to get an up-close look at the structures entombed in the amber.

They could see the pigments that once colored the feathers. Many were dark gray or brown in color, while others were clear. The creatures' colors may have ranged from transparent to mottled and diffuse colors, similar to the many shades of modern birds.

"Not long ago, extinct dinosaurs were considered by most as scaly and dull," Mark Norell, a researcher at the American Museum of Natural History in New York who wasn't invovled in the study, wrote in a Perspectives article in Science this week. "Now, instead of scaly animals portrayed as usually drab creatures, we have solid evidence for a fluffy colored past."

The specimens ranged from the primitive hairlike feathers of dinosaurs to the more specialized, branched designs of modern feathers. The primitive feathers would have came from dinosaurs such as the theropods, large and small carnivorous birdlike dinosaurs, while the bird feathers may have come from the hesperornithes, a group of flightless diving birds.

"Some of them show characteristics that are seen in flight feathers, including hooklets that latch one barb to the next," McKellar said. The hooklets hold individual barbs (individual filaments that extend from the Rachis that runs down the middle of the feather) together, making the wing more structurally sound. "This is the sort of structural adaptation that would make them useful for flight."

The barbs in some of the feathers are tightly coiled around their bases, features associated with diving behavior in modern birds such as grebes and penguins, the researchers said. They could have held water for transport to the nest, as well.

The fossil record of this evolution from simple to complex feathers is spotty. Researchers actually have older records of more modern feathers than they do of the simple dinosaur protofeathers. These amber samples show that these dinosaur feathers stuck around until pretty late in dinosaurs' evolution, possibly up until the beasts went extinct. [Image Gallery: Ancient Life Trapped in Amber]

Jacob Vinther, a researcher from the University of Texas who wasn't involved in the study, said he wishes the team had opened up the amber pieces, as there might have been some pigment-producing cells preserved inside. But he told LiveScience in an email that, "this study gives us an amazing insight to the evolution of feathers and their morphology and function because of their sheer age."

His opinion was echoed by several other researchers in the field, who were particularly pleased with the details derived from the amber feathers that allowed the scientists to discern the special adaptations for flight and diving, Zhonghe Zhou, a researcher at the Institute for Vertebrate Paleontology and Paleoanthropology at the Chinese Academy of Sciences, told LiveScience in an email.

Zhou also noted that some of the feathers were more difficult to classify based on type, so scientists can't really be sure if they are bird or dinosaur feathers, or somewhere in between. Mike Benton of the University of Bristol had the same reservations.

"Modern feathers are diverse in morphology," Benton told LiveScience in an email. "Many degenerated [feathers that have turned back the evolutionary clock and become more simplified] or specialized feathers are comparable in morphology to theprotofeathers."