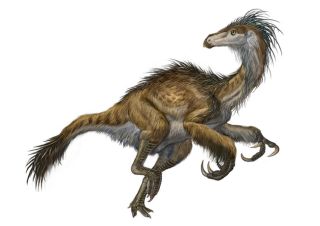 When alive, Beipiaosaurus would have sported shorter feathers on its entire body with tufts of long, broad feathers on its head, tail and trunk.
(Image: © Reconstruction by Zhao Chuang and Xing Lida.)

An isolated piece of feather, trapped within a tangled mass of spider’s web in Late Cretaceous Canadian amber. The feather branches may have been gray or black.

Numerous individual filaments in Late Cretaceous Canadian amber. These filaments are similar to the protofeathers that have been found as fossils with some dinosaurs. These filaments range from clear to near-black.

A feather accompanied by a microphysid plant bug. The coiling observed in the feather is directly comparable to coils found in modern bird feathers specialized for water uptake and are suggestive of diving behavior, but similar structures can be used to transport water to the nest.

Pigmentation in these feathers gives it a beaded appearance. Pigment in the feather suggests it would have been medium- or dark-brown in color.

The cork-screw shaped structures in the image are the tightly coiled bases of feather barbules.

An isolated barb from a white belly feather of a modern grebe (Aechmophorus occidentalis), illustrating coiled barbule bases comparable to those in the Cretaceous specimen. In both cases, the coiling is a structural adaptation that allows the feather to absorb water.

A feather barb that shows some indication of original coloration. The oblong brown masses within the image are regions of color within the barbules. In this specimen, the overall feather color appears to have been medium- or dark-brown.