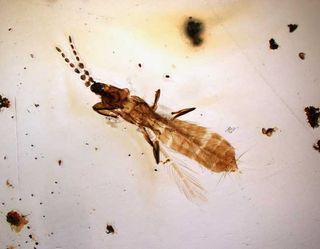 A host of bugs, fungus and other life forms have been found trapped in amber from the time of the dinosaurs.

The 95-million-year-old amber deposit could shed light on when and where plants first flowered and then diversified during the Cretaceous period, scientists reported this week in the Proceedings of the National Academy of Sciences.

The research reconstructs an ancient tropical forest uncovered in present-day Ethiopia, all from an era when Earth's continents were huddled into one supercontinent.

"Until now, we had discovered virtually no Cretaceous amber sites from the southern hemisphere's Gondwanan supercontinent," said Paul Nascimbene of the Division of Invertebrate Zoology at the American Museum of Natural History. "Significant Cretaceous amber deposits had been found primarily in North America and Eurasia."

"The first angiosperms, or flowering plants, appeared and diversified in the Cretaceous," explained fellow researcher Alexander Schmidt of the University of Göttingen in Germany. "Their rise to dominance drastically changed terrestrial ecosystems, and the Ethiopian amber deposit sheds light on this time of change."

The amber itself proved interesting. [See the life trapped in amber.]

Amber is fossilized tree resin. Bugs can become encased in amber if, while alive, they get stuck in the resin.

"The tree that produced the sap is still unknown, but the amber's chemistry is surprisingly very much like that of a group of more recent New World angiosperms called Hymenaea," Nascimbene explained. "This amber could be from an early angiosperm or a previously-unknown conifer that is quite distinct from the other known Cretaceous amber-producing gymnosperms."

An international team of 20 scientists contributed to the study. They found 30 arthropods trapped in the amber from 13 families of insects and spiders.

These fossils represent some of the earliest African fossil records for a variety of arthropods, including wasps, barklice, moths, beetles, a primitive ant, a rare insect called a zorapteran, and a sheet-web weaving spider. Parasitic fungi that lived on the resin-bearing trees were also found, as well as filaments of bacteria and the remains of flowering plants and ferns.