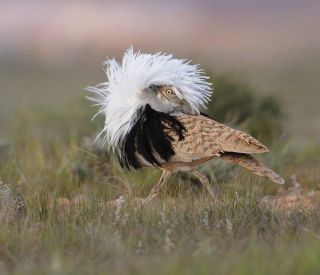 A male houbara bustard displays his white chest feathers in a mating display. A study published Aug. 1 in the journal Ecology Letters finds that male houbara bustards who display most vigorously in their youths pay for it in later life with low sperm counts.
(Image: © Yves Hingrat)

Being the prettiest bird of them all may come with a downside: early sexual burnout, a new study finds.

"This is the bird equivalent of the posers who strut their stuff in bars and nightclubs every weekend," study researcher Brian Preston of the University of Burgandy in France said in a statement. "If the bustard is anything to go by, these same guys will be reaching for their toupees sooner than they'd like." [Album: Animals' Dazzling Headgear]

Putting on a show

Instead of impressing the ladies via gelled hair and bottle service, male houbara bustards "erect an ornamental 'shield' of long white feathers in front of them as they begin to run at high speed, often circling a rock or bush," Preston and his colleagues wrote online Aug. 1 in the journal Ecology Letters. The birds finish the performance by flaring black-and-white feathers covering parts of their bodies, and a series of subsonic calls. [See an image of the display ]

Such energy-intensive mating displays cost males about 10 percent of their body mass over the mating season. The new analysis of 158,799 houbara bustard ejaculations finds that the displays eventually take their toll.

Burn out or fade away?

The ejaculate samples, collected from captive birds, showed that the most enthusiastic suitors — those that spend the most time performing — have the best sperm quality in the first six years of their lives. They have higher sperm production rates and fewer malformed sperm cells, and the sperm cells they produce are more active compared with older birds.

But these showy suitors quickly burn out. Although they display their feathers as vigorously as ever in old age, they ejaculate up to 85 percent less sperm. The sperm they do have left are less active and more malformed than the sperm of less showy birds — and the flashy birds' decline starts sooner.

The study might help explain how senescence, or biological aging, evolved, Preston said. Reproductively speaking, he said, the cost of living hard is burning out young.