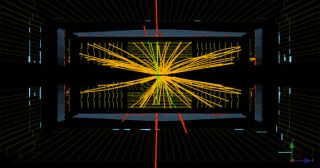 That's essentially the news from the physicists at Switzerland's Large Hadron Collider (LHC) who found a new particle last summer. So far, all evidence points to the conclusion that the particle is the long-sought Higgs boson, which would explain how other particles get their mass.

Still, the case isn't closed on the new particle just yet. For now, all scientists can say is that the particle, which was found by two experiments at the LHC called ATLAS and CMS, is consistent with predictions for the Higgs.

"Both the CMS and ATLAS experiments presented their latest updates, and no matter the angle studied, the new boson is still perfectly compatible with being a Higgs boson," LHC physicist Pauline Gagnon wrote on the blog Quantum Diaries.

The scientists are presenting their latest findings this week at the annual Rencontres de Moriond conference in Italy. [Gallery: Search for the Higgs Boson]

The question on physicists' minds is not just whether the new particle is actually the Higgs boson, but if it's the same Higgs boson predicted by the Standard Model (SM), the reigning rules of particle physics, or whether anything about it hints at new physics beyond this theory — an outcome some scientists hope for, because it could point the way toward solving mysteries such as what makes up dark matter.

"All in all, the story is that this is looking very much like a garden variety SM Higgs, which is discouraging for hopes of hints about how to get beyond the Standard Model," physicist Peter Woit of Columbia University wrote on his blog Not Even Wrong. "The experiments will continue working on improving their analyses of this data, but it seems unlikely that the picture will change much."

One of the ways scientists look for deviations from the Standard Model in the particle's behavior is by studying how the particle decays. Because the new, exotic species is unstable, it only lasts for small fractions of a second, before giving rise to other, more mundane particles. The Standard Model makes very specific predictions about which other particles the Higgs should decay into, and how often.

At the conference this week, CMS scientists announced they'd found evidence that the new particle decays not just into other bosons (such as photons, or particles of light), but into a class of particles called fermions, which include matter particles such as quarks, which make up protons, and leptons, which include electrons.

The CMS experiment found evidence that the new particle can decay into two tau leptons — something that hadn't been established before.

ATLAS, for its part, found a slight divergence from Standard Model predictions when it comes to the particle's rate of decay into two photons. CMS hadn't collected enough data about this type of decay to present yet.

"It will be particularly interesting to see what CMS obtains in the two-photon channel in their next update," Gagnon wrote. "If any deviation gets confirmed, it will draw a lot of attention from theorists due the possible huge consequences. A significant deviation with respect to the theoretical predictions would reveal a flaw in the model and help zoom on the right solution."