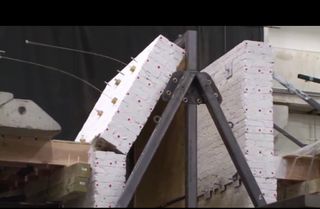 New York City's brick houses would fall apart if an earthquake the size of the one that struck in Christchurch, New Zealand in 2011 hit near the metropolis, a recent earthquake simulation found.

The shake table test broke an unreinforced brick wall in half on Feb. 18 at the University at Buffalo's Multidisciplinary Center for Earthquake Engineering Research.

The 14-foot (4-meter) wall, built with materials such as 100-year-old brick, simulates the central walls of the turn-of-the-century row houses (often called brownstones) found in New York, researchers said. The shake table first mimicking powerful magnitude 5.8 earthquake waves, similar to the 2011 Virginia earthquake, rocking back and forth beneath the walls. But it took a magnitude 6.3 earthquake, which is 5.6 times stronger, to snap the unreinforced wall. [Watch the shake table test]

Unreinforced masonry buildings account for about 80 percent of New York City's housing and appear commonly throughout the East Coast, said structural engineer Juan Aleman, a graduate student at the university.

The good news is that a similar brick wall, reinforced with steel rods and bolts as is done in earthquake-prone California, withstood the shaking. "We're trying to understand, 'How much better does a building perform when it has been retrofitted?'" said Gilberto Mosqueda, a structural engineering professor at the University of California, San Diego, who took part in the test.

Data from the simulation will help Aleman model New York City's vulnerability to earthquakes. "We will try to understand what will happen in a real building if an earthquake of magnitude 5.0 or greater happens," he told OurAmazingPlanet.

The 2011 Virginia earthquake, which hit a sparsely populated region, destroyed as many as seven houses and caused major damage to 120 other buildings in the surrounding region, according to government reports.